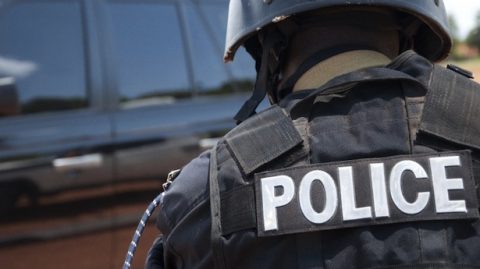 It said the near Octogenarian suspect, who hails from Ugbaike community, Enugu Ezike in Igbo -Eze North Council Area of Enugu state, committed the ungodly act on 30th, August 2019, and was arrested by its operatives attached to the State Criminal investigation Department, SCID,

Parading Boniface on Wednesday at the state police headquarters in Enugu, alongside 14 other suspects ,including the pentecostal Pastor, who allegedly murdered the girl friend in Enugu, the state Commissioner of police, Ahmad Abdur-Rahman, said the alleged aged rapist, who is serving as a security guard at a Community Secondary school, lured the little girl to one of the Staff room where he had carnal knowledge of her.

According to the Enugu police boss, the victim was sent an errand by her grandmother when the suspect lured her to the Staff room, adding that luck however, “ran against him, as he was caught by a good Nigerian whom he had wanted to bribe to enable him not to report.

When asked by newsmen why he indulged in  the act, Boniface, blamed his action on Satan and pleaded for forgiveness, saying that he had never found himself in such a mess since he started working in the school  as security guard for over twenty years now .This is an act of Satan, Please forgive me as I have not done this before.

Meanwhile, the 33 year old Pastor Eze, who is the General Overseer of Royal Priest Prophetic Ministry Enugu, murdered his girlfriend  late Ogechukwu Ogbodo, a native of Amagunze in Nkanu East council area of Enugu state on 15th of July , 2019 at about 9 pm, inside his residence located behind Bethel Plaza Railway quarters GRA Enugu.

He said after killing her, the suspect who hails from Obollo Etiti, in Udenu local government area of the state, took away her money totaling 2 million naira and her land documents, adding that the Pastor told the police that he has been dating the deceased for over five years now before the unfortunate incident.

The Pastor, who could not control his tears, while responding to questions from newsmen, blamed his action on his high level temperament.

The Enugu police helmsman, used the briefing to advise criminal elements still operating in the state to better repent and seek for  genuine source of livelihood, or be ready to face the music if apprehended by law enforcement agents.