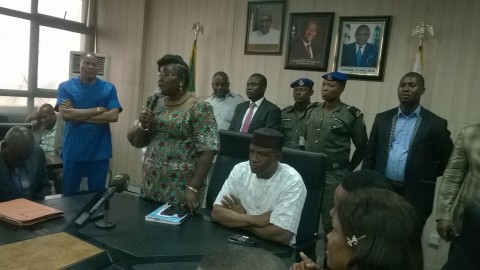 *As Rivers APC Hails Buhari Over Her Appointment

She said this on Tuesday in Port Harcourt when the outgoing Managing Director, Bassey Dan-Abia handed over to her at the commission’s headquarters.

Her words: “I have in-depth knowledge of what the commission ought to be doing in terms of development. I understand what our challenges are. It is now time for me to do my part.

“I have a responsibility to God and to President Muhammadu Buhari to ensure that his vision for the Niger Delta comes to pass. Because I am yet to get briefing from the directors. I cannot make a clear policy statement. But I will do what the President wants, which is the development of the region. We will hit the road running.”

She also commended the out going MD, Dan-Abia for his efforts in the commission, adding that he has done well as the MD of the NDDC.

The APC in a statement signed by Mr Chris Finebone noted that the appointment by Mr. President further demonstrates his readiness to recognise and appoint qualified, tested and worthy sons and daughters of the South-South into positions of responsibility in his government.

“We have no iota of doubt that Mrs. Ibim Semenitari will match and even exceed the expectations on her new assignment by Mr. President, our party, people of the South-South and entire Nigerians because of her zeal, capability and capacity to deliver whenever she is called to serve.” the party observed.

“This optimism is based on her verifiable track record of achievements in the past especially while she served as the Honourable Commissioner for Information and Communications in the Cabinet of the former Governor of Rivers State, Rt. Hon. Chibuike Rotimi Amaechi and as a member of the Communications Directorate of the Buhari Presidential Campaign Organisation.” the party stated.