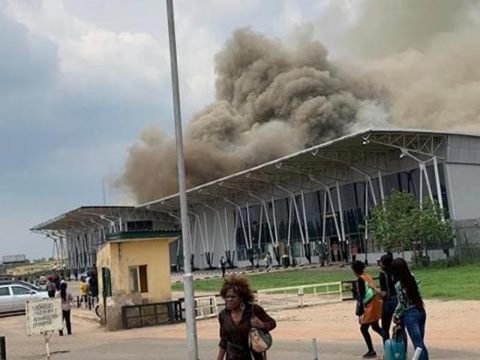 (AFRICAN EXAMINER) – Some parts of the Sam Mbakwe Airport in Owerri, Imo capital was gutted by fire which was reported to have started by 2:00pm on Monday.

The Director of the State Fire Service, Mr Japheth Okoroafor stated that the fire started as a result of electrical problems.

He lamented that the fire service which reported at the scene would have had more success barring their lack of equipment.

Okoroafor said that the VIP lounge was badly damaged before the fire could be controlled.

“We have only one fire truck servicing the entire state; this operation would have been more successful if we had the necessary equipment.

“We want to use this opportunity to call on the government to equip us as we are in serious need of upgrading because such incidents can happen at any time,” he said.

The Head of Imo, Abia operations office of the National Emergency Management Agency (NEMA), Mr Evans Ugo when contacted said he could not comment as the Agency were yet to visit the site.

Yakubu said the fire started at about 2.00p.m but was however, curtailed swiftly by officers of the Aerodrome Rescue and Fire Fighting Services Department of FAAN.

“There was no casualty and normal operations has since resumed at the airport.

“The authority has commenced preliminary investigations into the cause of the incident,” she said.