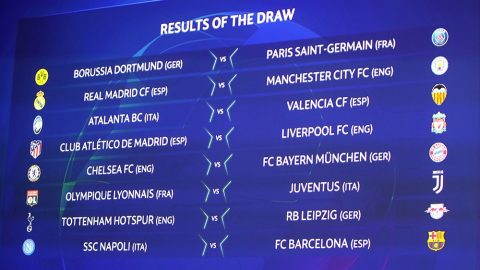 (AFRICAN EXAMINER) – Thirteen-times winners, Real Madrid have been drawn against English champions Manchester City in the UEFA Champions League round of 16

In the draw held Monday, the title-holders Liverpool is to face Diego Simeone’s Atletico Madrid.

Real Madrid ended up in pot two after finishing second in their group behind Paris St-Germain (PSG).

Manchester City were the unlucky side to be paired with them when their name was pulled out at the UEFA headquarters in Nyon, Switzerland.

The English Premier League (EPL) titleholders, who will be at home in the second leg, have yet to beat the Spanish side.

They have had two draws and two defeats in their previous four meetings.

Manchester City’s Director of football Txiki Begiristai said “ReaPep Guardiola has a much more encouraging record with nine wins, four draws and four defeats in 17 meetings as coach of FC Barcelona and then Bayern Munich.

“It’s a difficult one,” l Madrid are the best. We want to be the best, and so we have to try and beat them. It’s always a pleasure to play against Real Madrid. We know them very well. They know our manager.”

Liverpool and Atletico Madrid’s previous meetings have produced one win for each team and two draws with both teams scoring four goals.

Only Europe’s biggest five leagues —- England, France, Germany, Italy and Spain —- were represented in the draw and 11 of the 16 teams also reached the knockout stages last season.

England and Spain managed to get all four of their teams into knockout stages.

FC Barcelona were pitted against an unpredictable Napoli, the first time the two sides have ever met.

Napoli fired coach Carlo Ancelotti immediately after beating Genk to make sure of their place in the last 16.

He was replaced with Gennaro Gattuso, who has never coached in the UEFA Champions League before.

The Championship will commence in February 2020./NAN