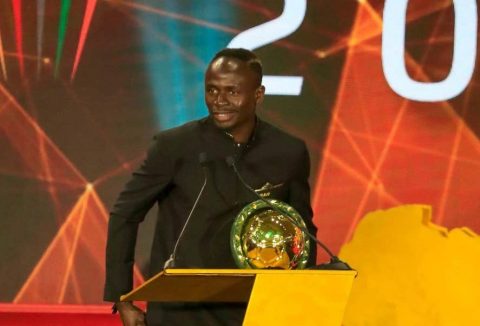 (AFRICAN EXAMINER) – Sadio Mane has been named African Footballer of the Year for 2019 on Tuesday after winning the Champions League with Liverpool and leading Senegal to the Africa Cup of Nations final.

Mane, 27, wins the award for the first time after finishing runner-up to his Liverpool teammate Mohamed Salah of Egypt in 2017 and 2018.

“To be honest I would love to be playing football more than speaking in front of many important people.

“It is a big day for me. I would love to thank all the Senegalese people. They pushed me. I’m from a very small village, Bambali, I’m sure they are all watching me on TV.” He said

Mane is the second Senegalese to win the award after El Hadji Diouf, who was the winner in 2001 and 2002.

Meanwhile, Barcelona and Nigeria forward Asisat Oshoala was named the African Women’s Player of the Year.