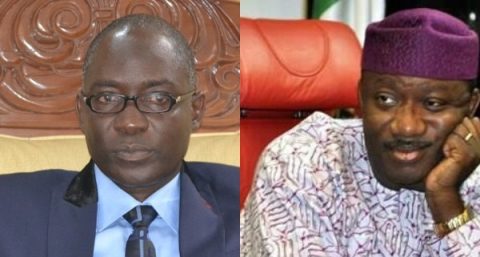 INEC boss disclosed this Tuesday in Abuja, in an interview with newsmen, when he received a delegation of the ECOWAS Female Parliament Association (ECOFEPA).

Prof. Yakubu confirmed that the details of the political parties would be published Tuesday in Ekiti as required by law.

He informed that the nomination has closed and 35 political parties are fielding candidates for the Governorship election slated for July 28, 2018.

The INEC Chairman, who said that the commission was ready for the election, reiterated the INEC pledge that all registered voters in Ekiti and Osun would get their Permanent Voter Cards PVCs before the election days.

“In the cases of Ekiti and Osun, remember INEC conducted Continuous Voter Registration (CVR) not only in 2017, but also in 2018 and at ward level.

“We have assured citizens in Ekiti and Osun that all those who registered will get their PVCs ahead of the elections.

“We have already delivered PVCs for 2017 in the two states for 2017 and 2018. We are mopping up for those who registered at ward level during the devolved CVR’’ Prof Yakubu said.

“As far as Ekiti election is concerned, we have not accredited observers for the Ekiti election. There is a procedure and it is known. It is even on our website, the guidelines for elections observation.

“We have received quite a number of applications, even yesterday the applications kept coming in, but we have not accredited any group for election observation in Ekiti and Osun.

“Very soon we will do this and as usual we will make it known to public’’ the Chairman reiterated.

Earlier in his address to the ECOFEPA delegation, Yakubu pledged to use his position as the President of ECOWAS Network of Electoral Commissions (ECONEC) to advocate for more women participation in politics.

He said INEC was a gender friendly commission, saying out of 11 National Commissioners in the commission three were women.

Yakubu added that the commission already had its Gender Policy and was working with political parties to ensure more women’s participation in politics.

The 1st Vice President of the ECOWAS Female Parliament Association (ECOFEPA), Hon. Aissata Daffe, from Conakry, decried the low level of women participation in politics and their number in elective positions in the sub-region.

Daffe said that women constituted over 52 per cent of the Nigeria’s population but only had six per cent representation at decision making levels, while Senegal had 42 per cent.

Dr Sintiki Ugbe of ECOWAS Commission Abuja, presented the ECOFEPA’s ECOWAS Gender Election and Startegic Framework   document to Yakubu and said they were on advocacy visit to INEC.

Ugbe expressed hope that the document would serve as a tool of election management bodies in ECOWAS and all other stakeholders to integrate gender in their electoral processes.