4 Killed, As Another 4-Storey Building Collapses in Lagos 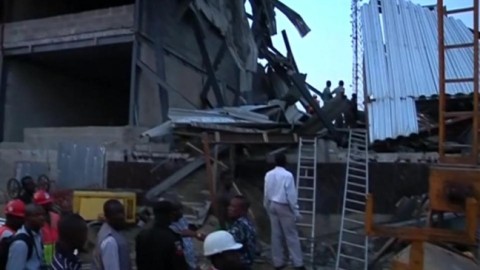 Another tragedy struck in Victoria Island area of lagos State, Southwest Nigeria late on Monday as four-storey building under construction caved in and killed four people, injuring many and about 25 people rescued 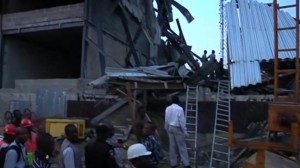 There was weeping and wailing at the scene of the tragedy at No. 8 Muri-Okunola Street, Iru/Victoria Island Local Council Development Area, LCDA, as rescue officials worked frantically to rescue trapped victims.

Officials of the Lagos State Emergency Management Agency, LASEMA; Lagos State Fire Services, the police and other rescue agencies were on ground to rescue trapped victims, in the rescue operation, which lasted till the early hours of today.

LASEMA GM, Dr. Femi Oke-Osanyintolu said the rescue teams were very prompt to the scene and were able to recover four dead bodies, saying that his men had to leave the scene of the Great Nigeria Building fire disaster to the scene of the collapsed building to save lives.

“At least, 25 people have been rescued but unfortunately we recovered four dead bodies, it is a four storey building,” he stated.

The Director of the Lagos State Fire Service, Rasak Fadipe said the collapsed building was under construction when it collapsed, adding that rescue agencies were on ground to ensure that people were rescued from the debris.

Also, Lagos Commissioner for Physical Planning and Urban Development, Mr Olutoyin Ayinde, said the cause of the collapsed building could not be ascertained, but assured that government would do all it could to stem the tide of collapse buildings in the state.

According to him, most of the affected people were labourers working on the collapsed uncompleted building when the tragedy occurred.

As at on Tuesday morning, unconfirmed source had it that about 10 people were still trapped under the rubbles of the collapsed building.