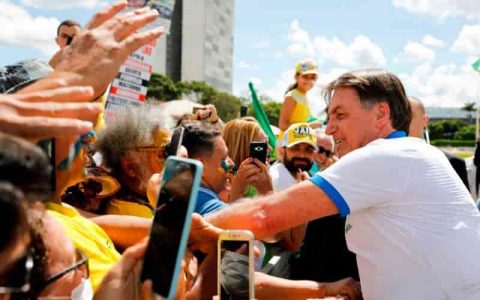 (AFRICAN EXAMINER) –  Brazilian President Jair Bolsonaro, on Friday, again ignored some safety measures recommended for preventing the spread of COVID-19, shaking hands with supporters during a visit to the southern city of Bage, local media reported.

Bolsonaro was visiting the city, six days after he had announced his recovery from COVID-19 in the country with the world’s second-largest numbers of infections and deaths from the virus.

The president wore a face mask, but allowed supporters to throng around him on arrival, according to the news portal, G1.

He displayed a box of the drug hydroxychloroquine, which he said he took for his COVID-19 infection, though there is little scientific proof of its effectiveness.

Bolsonaro, who has downplayed the severity of the pandemic, maintained during his two-week infection that he was in good health.

But on Thursday, he said he had taken a blood test and “felt a little weak” the previous day.

He also said he was on antibiotics for “a bit of infection” and could have “mould” in a lung.

The president initially called the pandemic “a little flu” and has advocated keeping the economy open.

After he received a positive test result for the disease on July 7, Bolsonaro worked from his residence, but was also seen moving around the area and talking to people without a face mask.

During a visit to the north-east on Thursday, he faced a crowd without a mask.

Brazil has confirmed more than 2.6 million novel coronavirus infections and over 91,000 deaths, coming second only to the United States.