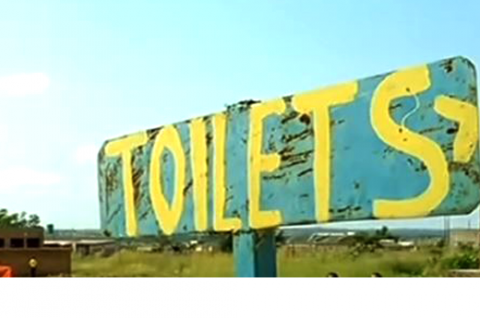 (AFRICAN EXAMINER) – As the world marked World Toilet Day on Thursday, November 19th, 2020 to create awareness about the important health benefits of appropriate toilet hygiene across Africa, it is good that Nigerians learn from Bangladesh and see how it can remedy the amount of open defecation in the country.

This year’s World Toilet Day observance comes in the midst of COVID-19 and as such, the need to heighten the awareness of correct toilet hygiene cannot be over emphasized.

According to the World Health Organization (WHO), an improved sanitation facility is one that hygienically separates human excreta from human contact but this has not been the case with African countries.

According to Mistura, the toilets in the school is not enough and this has made many to defecate in open fields around the school premises.

The case of Mistura’s school is not different from Abubakar who sells at the Ibafo Market in Ogun State. According to Abubakar. Most times he uses the cover of darkness to defecate due to the lack of public toilets around the market.

In Oyingbo, Iddo motor park, the story is the same despite a few number of private latrines around, open defecation still persists.

This was actually the same with Bangladesh who used to top the chart as the number one open defecation country in the world but the tide has since changed as Bangladesh has handed the baton to India.

However, Nigeria ranks second and first in Africa in open defecation.  A shame for a country that prides itself as the heart of Africa.

It is good that Nigeria has discovered the challenges inherent with open defecation as the Minister of Environment Dr. Mohammed Abubarkar while speaking at the 2020 World Toilet Day, stated that Nigeria needs technologically sound structures for the containment, collection and treatment of human waste for proper sanitary hygiene practices.

According to Abubakar, for Nigeria to eliminate open defecation, there is need for both the public and private sectors to join hands with local communities to eradicate the menace.

‘‘Many people still use the bush and water bodies as their regular means for excreta disposal. Many institutions do not have sanitary facilities and where they exist, they are either not functioning or misused,” Abubakar had said.

‘‘Most urban areas do not have sewerage systems, safe collection of sewage and disposal, therefore, become a huge challenge as many of the bodies of water including rivers and streams become a repository for sewage and wastewater.

‘‘One of the major consequences of poor excreta and sewage disposal is the high rate of diarrhea disease which is the second cause of high morbidity and mortality rates amongst children under the age of five.”

Abubakar has listed the problems but if Nigerians should meet the Sustainable Development Goals (SDG) of ensuring access to clean water and sanitation for all, it needs to take a look at what Bangladesh did right.

The political class should show serious political commitment to the issue of open defecation and just like Bangladesh did, the local government and the traditional leaders should be involved in the campaign of reducing and eliminating open defecation in the country.

In Bangladesh, open defecation was so rampant that the government after building toilets, adopted the “shame game” policy where children were given whistles and meant to shame anyone who defecates in the open.

This was as a result of a dogged campaign from the Bangladesh government as kramul Islam, director for water, sanitation and hygiene of the development NGO Brac stated, “The government has made a huge commitment. The government decided that funds should go to the extreme poor who do not have latrines. So that basically gives a big push from the public sector for spending on sanitation.”

If Nigeria will achieve sanitation victory and meet the SDG goal of good sanitation, then the government at all levels must work together to build more toilets across the countries and the private sectors also have a role to play too.

Also, there is need for a campaign to help to enlighten and change public attitudes and habits.