APC Distributes Palliatives to Enugu Residents Regardless of Party Affiliation 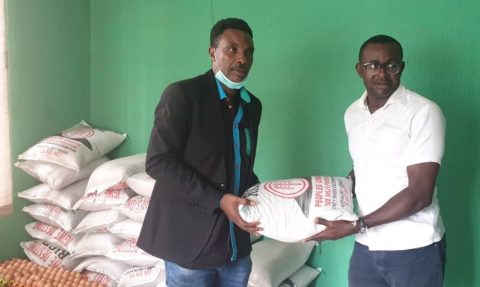 (AFRICAN EXAMINER) – The Enugu state chapter of All Progressives  Congress ( APC), on Sunday put smile on faces of scores of its vulnerable faithful and members of the ruling People’s Democratic party PDP, as it began distribution of assorted food items and cash to them as palliatives to cushion the grueling effect of the COVID 19 lockdown in the state.

African Examiner reports that the palliatives included bags of rice, yam, eggs, among other items, just as the items would be shared among the 260 political wards in the 17 council areas of the state.

Speaking with newsmen at the party’s state Secretariat in Enugu during the distribution of the items, chairman of  APC in the state, Dr. Ben Nwoye, said the gesture was aimed at ameliorating the suffering of its vulnerable members, including members of the PDP in the state who are currently facing serious untold  hardship occasioned by the Coronavirus pandemic currently ravaging the entire globe.

The Enugu state APC boss, said he envisaged hunger pandemic in Enugu State, following the lockdown, stressing that as it stands now, even though, Enugu was free from the coronavirus pandemic as the two people who earlier tested positive, were now negative, hunger does not recognise party affiliation.

Dr. Nwoye however, expressed concern over the high rate of hunger in the state which is becoming disturbing, despite all the news being peddled in the media  that palliatives were being shared in Abuja.

According to the chairman, “in Enugu APC, we don’t know where they kept food and money. We thought it wise and called some leaders and they came and contributed for us to procure these things you are seeing, which we are distributing to vulnerable persons, irrespective of party affiliation.

“The State Government is doing well at the local government level. What is happening in the state is done through local government council and president-generals and these people are either PDP members or affiliated to PDP. We thought we should do our little here. Hunger does not know political party, just like COVID 19.

Nwoye, regretted that unlike other states where things were coming from the federal level, Enugu receives nothing from Abuja.

He said: “that is why well-meaning affluent APC members said we should do something here. We bought locally made rice from Abakiliki, yams and eggs. The eggs will be given to children of Enugu State because they need protein.

The chairman hinted that an APC leader in the state, (names withheld) has a monetary package of (five thousand naira) 5000, for 200 vulnerable persons, which will soon be distributed to the people.

“We thought we should do our little contribution to our people here in the  state, and this gesture is for the vulnerable people in the 260 political wards of the 17 local government areas of Enugu state, because, hunger does not know political party, just like COVID 19.