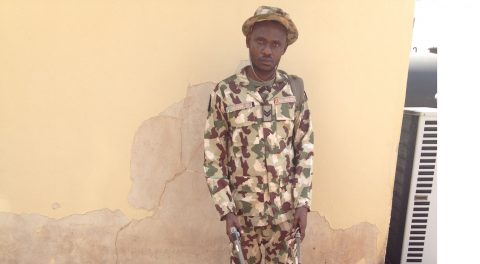 But he told the Army that he hailed from Ugbor Hill, Aba, Abia state.

According to the GOC, Obinna wears army camouflage and has been parading himself as a soldier until the law caught up with him on his way from Abuja to Aba, Abia State, where he probably was planning to go and carry out a robbery attack.

Also paraded was a man whose name was given as Ifeanyi Agbaraenyi or Ifeanyi Ogbonna as well as Ifeanyi Agalamahi who claimed to be a native of Udi Local Government Area of Enugu State. He and his colleagues in crime specialise in cable vandalism.

The GOC told newsmen that on Tuesday, November 26, 2019 troops of Sector 5 under Arilogwu Udo 1 who were on routine patrol, arrested Obinna who impersonated as a serving soldier of the Nigerian Army.

The suspect was in a vehicle conveying garden eggs from Abuja to Abia State when he was nabbed by the security operatives.

The driver conveying him gave him a lift on the premise that he was a soldier on transit.

The suspect who obtained a diploma in Computer Engineering from Nigerian Army Institute of Technology and Environmental Studies, Makurdi, Benue State specialized in producing Army Stickers and badges.

On interrogation, it was revealed that he was on his way to Aba for the purpose of committing armed robbery.

The suspected fake soldier told newsmen that he decided to fake as a soldier because of the prestige and respect.

“I use army uniform because of the respect and the prestige.  I have been in the business for the past one year,” he said.

Asked how he came about the money and the gun, the dagger, he could not explain but said it was he brother that gave him money to go and recover his vehicle from the East.

On his part Ifeanyi Agbaraenyi, as he told the Army was arrested on Wednesday, November 27, 2019 at Opi, Nsukka Local Government Area of Enugu State.

Troops of Sector 5 patrol, acting on a tip off by the natives that three criminals suspected to be cable thieves were stealing cables in their vicinity, pursued the suspects.

When the troop pursued them, Ifeanyi alone was caught while the rest escaped.

The suspect, allegedly tried to bribe the soldiers with N700,000.00 when he was caught which they declined.

Gen. Adegboye said the Army is determined to protect lives and property under its 82 Division.

“The 82 Division Nigerian Army, will continue to protect lives and property of the law abiding citizens within its area of responsibility and members of the public are advised to report suspicious movements, persons or objects through the Nigerian Army emergency call no 193 or other Exercise Atilogwu Udo 1 sectors call earlier,.

He however disclosed that the suspects would be handed over to the police for prosecution.