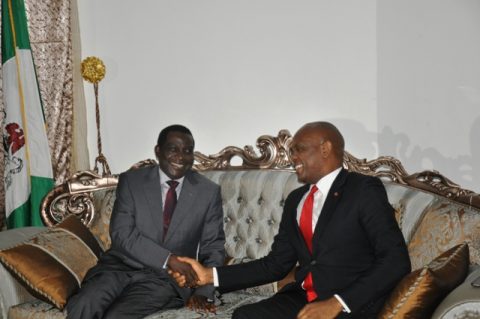 Lagos, Nigeria, August 25, 2016 ­– Tony O. Elumelu, Chairman of Heirs Holdings and United Bank for Africa (UBA) has advocated entrepreneurship as a veritable solution to achieving poverty reduction in the country.

Elumelu who is also the Founder of The Tony Elumelu Foundation delivered a paper themed: “Entrepreneurship, Corporate Social Responsibility and Africapitalism: The Role of The Private Sector In Fighting Poverty in Nigeria”, at the nation’s think-tank, the National Institute of Policy and Strategic Studies in Kuru, Plateau State.

There, he addressed a distinguished guest list of 67 participants from top government constituencies including the police, the military, national planning, works, and the presidency, debating ways to move the country forward in light of the present economic challenges.

In his lecture, the chairman of Heirs Holdings and founder of the Tony Elumelu Foundation, acknowledged the efforts of the Institute in constituting the gathering of think tanks, hailing it as a timely event in paving the way for engineering the country’s socio-economic development. He expressed optimism that with the right policy reforms, Nigeria could be well on its way to rising above its present challenges.

Tony Elumelu reiterated his long-term conviction on entrepreneurship as a solution to arresting the economic challenges facing the country. He stated that past governments had not been successful in eradicating poverty in Nigeria in spite of the various entrepreneurship schemes that have been introduced over the past 30 years.

“Governments alone do not have the capacity to provide the basic daily needs or employment for the millions of young Nigerians entering the job market every year.  Therefore, the private sector must be an integral part of our national poverty eradication and development strategy,” the consummate entrepreneur stated. “If our entrepreneurs succeed, Nigeria succeeds” Elumelu stressed.

An advocate of Africapitalism, Elumelu expressed that entrepreneurship and not philanthropy, is key to achieving poverty reduction and empowering Nigerians as we strive to solve our challenges without dependence on aid from outside the country.

“No one but us will save ourselves,” he said. “The development of Africa is up to Africans. Donors and partners can help, but the work of developing our nations is ours. Nigeria’s poverty and development challenges are great. But they do not exceed the capacity of our people to solve them. We welcome every initiative that helps in reducing poverty. More effort is required’ said Elumelu.

Expounding on the benefits of Africapitalism, he cited the achievements of the Tony Elumelu Foundation Entrepreneurship Programme as a case study of how Africans, and by extension Nigerians, can solve their own problems via entrepreneurship.

The goal of the yearly programme is to invest $100 million over the next 10 years to identify, train, mentor and seed 10,000 African businesses with a view of creating 1 million new jobs and $10 billion in additional revenue for the continent by democratizing and institutionalizing the ‘luck. The second set of 1,000 entrepreneurs was announced a few months ago and boasted of representation from all thirty-six states of Nigeria and other African countries.

“The programme and the forum will serve to empower, inspire and, most importantly, teach these young African Men and Women how to become fishermen. I am proud to tell you that in the Class of 2015, Nigerian entrepreneurs numbered 480, and all 36 states were represented. This year, Nigerians make up 601 (or 60%) of the top 1,000, bringing the total number of Nigerian entrepreneurs in our programme to 1,081,” he said as he tasked the participants to act in their various capacities to reduce poverty in Nigeria.

The Acting Director General of the Institute, Ibrahim Lamorde, in full support of this in his vote of thanks, urged the participants in their respective workplaces to commit to creating a conducive environment for entrepreneurs to thrive.

“All 67 participants and those of us who are also in other areas of responsibility will go out and ensure that between now and the end of the year, we promote just one policy that will drive change. I think this will go a long way in addressing the issue of poverty in this country.”

He concluded by urging Elumelu to encourage and advise other wealthy entrepreneurs to emulate and support the good work he is doing in Nigeria and across the African continent.