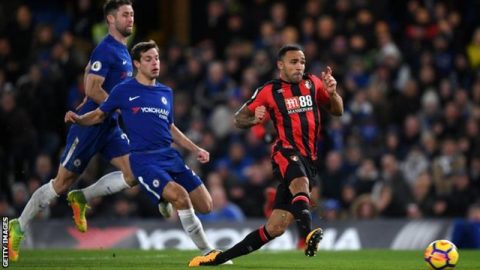 Second-half goals from Callum Wilson, Junior Stanislas and Nathan Ake secured the Cherries’ first away win in seven league matches as Chelsea suffered their joint-heaviest loss of the season.

This is Bournemouth’s third top-flight campaign – they beat Chelsea and Manchester United in 2015-16, Liverpool and Leicester in 2016-17 and Arsenal earlier this month.

Howe has been managing the club since October 2012, his second spell in charge after a stint from 2009-2011 during which they were in the third and fourth tiers.

“That has to be our best result and the best performance in getting the result,” said the 40-year-old Englishman.

“We were very aggressive and everyone was magnificent. Our aggressiveness, work-rate and endeavour – it all came together.

“Although it was a game of few chances, we deserved the victory and scored some great goals. We had to be at our best.”

Wilson put the visitors ahead when he benefited from Tiemoue Bakayoko losing possession and exchanged passes with Jordon Ibe before finishing past Thibaut Courtois.

Wilson set up Stanislas for the second goal, before Stanislas’ shot was turned in by Ake from close range as Bournemouth gained only their third win over Chelsea.

The Cherries move up to 10th while Antonio Conte’s side, who signed striker Oliver Giroud from Arsenal for £18m earlier on Wednesday, drop to fourth./BBC