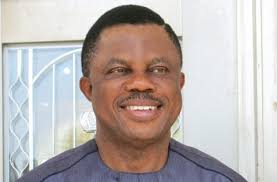 (AFRICAN EXAMINER) – Governor Willy Obiano of All progressive Grand Alliance, APGA has been declared winner of the  gubernatorial election held in Anambra state, on Saturday 18th, November 2017, after polling a total 234,071 votes.

His closest rival, Dr. Tony Nwoye, of All progressive Congress APC scored a total of 98,752 votes, while candidate of the People’s Democratic party, PDP, Oseloka Obaze garnered 70,293 votes to clinch the  position.

He won by a landslide in all the 21 council  areas of the state, including those of his key opponents,Tony Nwoye of the All progressive congress, APC, Oseloka Obaze of PDP and Osita Chidoka of United peoples   party, UPP .

Announcing the result officially Sunday at the  Independent National Electoral Commission’s INEC  headquarters in Awka the Anambra state capital, returning officer for the election and Vice Chancellor of University of Calabar, (UNICAL) Professor Zana Apkatu said “haven’t scored the highest number of valid votes, and satisfied the requirement by law, Willy Maduabuchi Obiano of APGA is declared winner of the election, and he is hereby returned.