#Bring Back Our Girls Protest: Melaye Quizzed By Police in Abuja 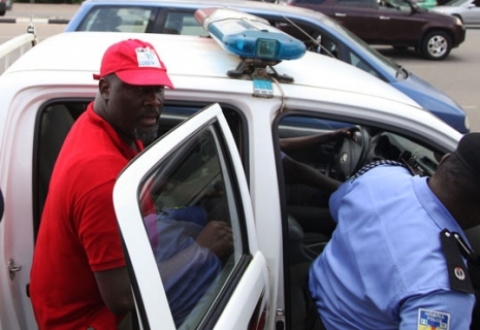 The Executive Secretary of Anti-Corruption Network and former member of the House of Representatives, Dino Melaye. was quizzed by Police in Abuja yesterday, for staging street protest over the abduction of over 200 female students of Government Girls’ Secondary School, Chibok, Borno State, by members of Boko Haram.

The protest was aimed at compelling the Federal Government to expedite action towards the release of the students, abducted over two months ago. Melaye was invited through a letter with Ref. No. CR/3000/FIB/FHQ/ABJ/VOL.T/137 and dated June 20, 2014 signed by one Steve Okoshone, an Assistant Commissioner of Police, (ACP) from the Office of the Inspector-General of Police (IGP), Mohammed Abubakar, directing him to appear “to discuss crucial issues of security concern.”

Commenting, Melaye said “the struggle to liberate the masses from the clutches of political vampires was a battle of no retreat, no surrender. We must do everything to rescue this country from the hands of these economic canker worm”.

The former lawmaker, disclosed that there has been intimidated, arrested, threatened and so many assassination attempts on his life, but stressed he was not deterred.

“But for me, I am resolute because the battle to deliver this country from economic canker worms, financial vultures and inept leadership, as I have repeatedly said, is a battle of no retreat, no surrender. In an unjust society, silence is a crime; this is the time in the history of Nigeria where silence is no longer golden. People must come out and speak because the day you stop eating is the day you start dying. Where dictatorship becomes legalized, revolution becomes a right, Melaye maintained.