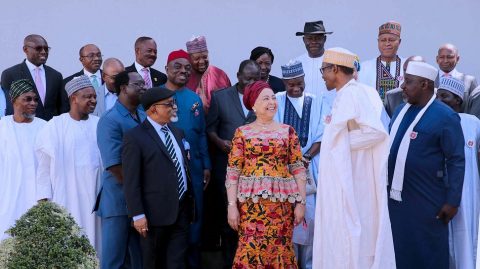 The 30-member committee was inaugurated inside the Council Chambers of the Presidential Villa, Abuja.

In his speech, President Buhari said “Government’s decision after considering your final recommendation will be sent as an Executive Bill to the National Assembly for it to undergo appropriate legislative scrutiny before passage into law.

“As is evident by the membership of the Committee, State Governors and Private Sector Employers are part of this process. This will ensure ease of implementation of a new Minimum Wage nationwide.

“Accordingly, conditions of genuine Social Dialogue should prevail in the spirit of Tripartism and Collective Bargaining Agreements. I therefore enjoin you all to collectively bargain in good faith, have mutual recognition for each other and always in a spirit of give and take.”

The tripartite committee which is headed by Ms. Ama Pepple has as parts of its terms of reference to negotiate a new National Minimum Wage for the Nigerian workers.

It would be recalled that Dr. Ngige on Thursday, November 2, 2017 hinted that arrangements have been concluded for the inauguration of the new minimum wage negotiation committee.

He informed then that the Nigeria Labour Congress NLC and Trade Union Congress TUC and their affiliates have made their nominations, noting that what is now left is to fine tune the date for inauguration.

Although, Senator Ngige was not categorical on the likely new minimum wage, still it is on record that the Labour is pushing for N56,000 – over 300 per cent of the present N18,000 minimum wage  in the public sector.