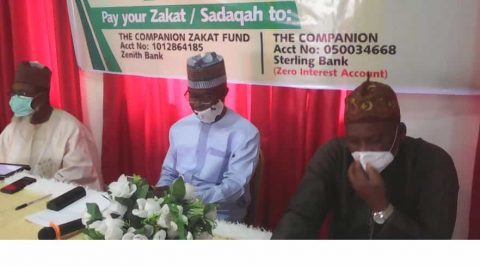 (AFRICAN EXAMINER) – In spite of the likely surge in the number of intending pilgrims in the next year’s Hajj, the new policies to be rolled out by the Saudi Arabia authority in a bid to comply with the COVID-19 protocols may likely change the situation and ‘’curtail’’ the number.

The immediate past National President of the Association For Hajj and Umrah Operators of Nigeria (AHUON), Alhaji Abdul Fatah Abdul Majeed said this in an interview with the AFRICAN EXAMINER, at the 7th edition of Zakat distribution and empowerment ceremony of The Companion – an association of Muslim men in Professions and Business, in Ikeja, Lagos.

According to him, factors such as: high cost of Hajj fee; the number of people per hotel rooms; increase in VAT – from five to 15 per cent and restriction of age, for instance, barring under age and adults, whose ages range between 55 and above and fuelling may militate against the anticipated huge number of pilgrims next year.

While noting that nobody knew yet what would be the cost, Alhaji Abdul Majeed who is also a member of AHUON BOT, said whatever the allocation Saudi authority gives to Nigeria, the National Hajj Commission (NAHCON) would be able to manage the number and organize a successful Hajj.

He recalled that the commission since 2006/2007 of its inception till last Hajj exercise has been managing between 65,000 and 95,000 pilgrims (for Hajj), working together with other stakeholders like the State’s pilgrims’ Boards and tour operators.

Alhaji Abdul Majeed also noted that the Grand mosque (Kaabah) in Mecca, presently can accommodate up to 5 million pilgrims from across the globe, but with the Saudi authority Expansion Vision 2030, the holy mosque can house up to 10 million worshippers, adding that the highest number of pilgrims so far was about 2.5 million across the globe.

He maintained that given these factors, Saudi would not be challenged with the likely explosive number of pilgrims for next year’s Hajj rite.

While delivering lecture with the title: ‘’Zakat as a Means of Social Security and Wealth Distribution’’ Alhaji Abdul Majeed who is a Banking and Finance Expert, stressed that charity was part of Sharia provisions, adding that the objectives of the Divine law include: protection of wealth and intellectual property.

He declared that poverty was not a mark of piety in Islam, urging the zakat beneficiaries to strive and utilize properly, the grants given to them, such that they grow their businesses and advance to the level of giving charity to others in the coming years.

Speaking earlier at the ceremony, the Secretary to the Zakat committee of the organization, Alhaji Layi Baruwa disclosed that a total of 85 applicants were screened, out of which 16 were empowered with business equipment; 47 applicants benefited under cash injection to grow and expand businesses; nine under urgent and sundry needs, such as rents. Apart from these, there were beneficiaries under scholarship, as well as empowerment for medical support.

The occasion was graced by The Companion National President, Alhaji Thabit ‘Wale Sonaike, who was represented by his predecessor, Bar. Musibau Oyefeso, among other State’s officials of the organization.