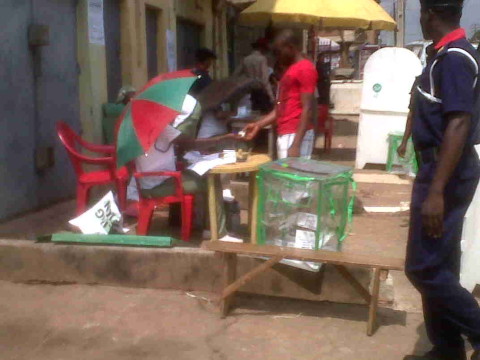 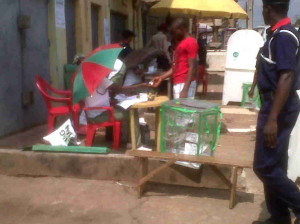 Participation of the three parties in the exercise is a contradiction to  their earlier threat of boycotting the poll.

However, a visit to various polling units by African Examiner’s correspondent revealed that voting commenced by 12 noon, and the  three parties are taking part in the exercise.

At Nkpor ward 11, in Indemili North local government area of the state, voters were seen performing their civic responsibility, including PDP members.

Speaking with African Examiner at Ogidi, in Idemili council area, shortly after going round some polling centres, the state chairman of Peoples Democratic party PDP, prince Ken Emeakayi, said the party is participating fully in the election.

He expressed satisfaction with the level of INEC preparedness for the supplementary election, saying “so far so good am impressed with what is going on.”

“They started early enough, and materials arrived all the venues early, apart from one place where materials came very late.”

“Besides, from what our agents are telling us, the election is going on well in all the polling units, because you know, we as the party leaders, can not be at every place at same time.

“I want to also use this medium to commend the inspector General of police IGP, Abubakar Mohammed, for the enough security provided for the supplementary poll.

Meanwhile, as at the time of filling this report, election is still ongoing across the 210 polling units in 16 local government area of the state, with heavy presence of security agents.