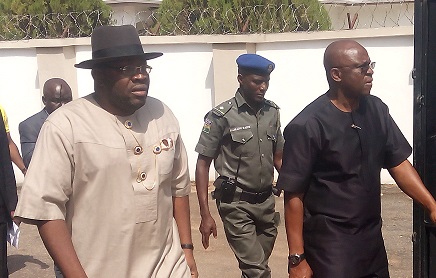 Fielding questions from Journalists after being conducted round some projects in Ado Ekiti, Dickson poured encomiums on his colleague for initiating critical projects at a critical period of national economic recession.

He described Fayose as a major mouth piece of the People’s Democratic Party (PDP) and the ordinary people in the country.

According to him, Ekiti people have been very lucky to have a leader like Fayose as Governor.

Fayose described the Bayelsa State Governor as a major stakeholder in Nigeria.

While thanking Dickson for finding time to rejoice with him on his birthday. Fayose described him as a Yoruba Prince, being a descendant of the Oba Fidipote Ruling House in Ijebu Ode.

He called on the people of Ekiti State to always see Dickson as one of their own.

Fayose also showered encomiums on Dickson for transforming Bayelsa to a modern state.

A statement signed by the Special Adviser to the Governor of Bayelsa State on Media Relations, Francis Agbo, said Dickson also paid a courtesy Call on the Ewi of Ado Ekiti, Oba Rufus Adeyemo Aladesanmi before leaving for Yenagoa.