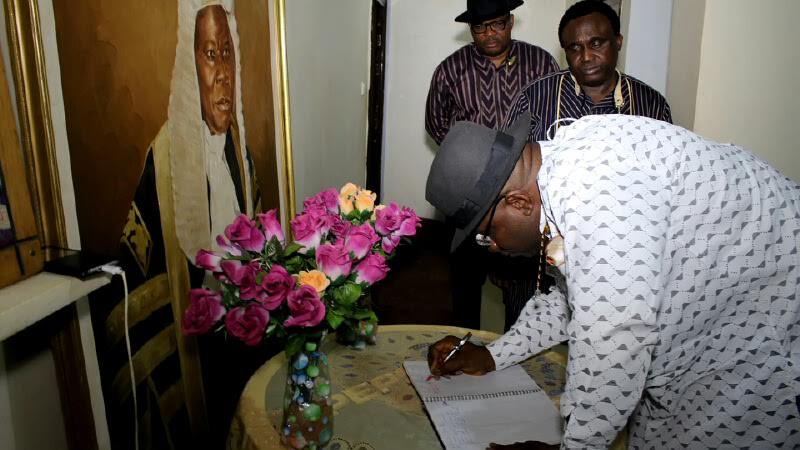 Bayelsa State Governor, Henry Seriake Dickson, has described the late Justice of the Supreme Court, Justice NikI Tobi, as “an ambassador of the Ijaw nation” who lived a life of selfless devotion, integrity and honour in the service of the nation.

He died on June 17 at the National Hospital, Abuja, barely one month to his 76th birthday.

A statement issued on Saturday by his Chief Press Secretary, Daniel Iworiso-Markson, said the governor said this during a condolence visit to the family of Justice Tobi in his Abuja residence.

He paid glowing tributes to the late JSC who will be remembered for his role as Chairman of the National Political Debate Conference.

According to him, the country had lost a legal luminary who gave everything about his life to the legal profession and contributed significantly to national development.

“He stood out as one of the best in the country”, Dickson stated, adding that the late Justice Tobi left worthy and indelible legacies that will make his family and the Ijaw nation to be proud.

He said the contributions of Justice Tobi to the development of justice system, the judiciary and the legal profession as a whole were deserving of commendation.

Dickson said, “We are proud of him and his legacies, especially as an icon of justice. The whole Ijaw nation feels proud of Justice Niki Tobi’s outstanding contributions to the nation. He was a patriot.

“Justice Niki Tobi was a thoroughbred, a highly principled, upright and intelligent personality whose contributions to the legal profession and nation-building will remain indelible in the history of Nigeria”.

In his response, the son of the late legal icon, Justice Ebiowei Tobi, on behalf of the family, thanked the governor and his entourage for the visit which, he said, represented a “tremendous love and  honour” for his late father.

He said the widow, Mrs. Gbegbeto Tobi and the entire family felt really consoled by the governor’s visit and prayed God to continue to support him in providing sound and purposeful leadership in the state.