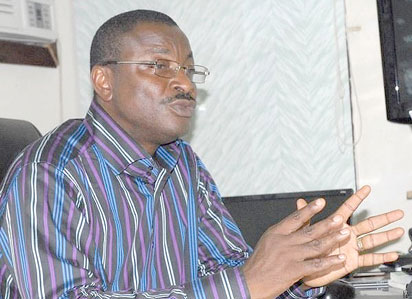 BENIN CITY, NIGERIA (AFRICAN EXAMINER) – The Edo state  chapter of people’s Democratic party, PDP has again, suffered another setback, ahead of the September 10th, 2016 gubernatorial election in the state, as one of the aspirants during the June 20 primaries, Solomon Edebiri, has resigned his membership of the party.

AFRICAN EXAMINER recalled that Edebiri’s action is coming less than two weeks, the Edo North senatorial district Coordinator of the party’s flag bearer, Pastor Ize- Iyamu defected to the ruling All Progressive Congress APC alongside of about 2000 members.

The former Aspirant announced his resignation on Thursday while speaking with newsmen in Obayanton community, near Benin city, the Edo state capital.

Edebiri, attributed his decision to quit the opposition party in the state to what he described as “dishonesty of the party leadership’’.

He stated that what happened on June 20 was quite disappointing and a complete negation of what democratic tenet is all about.

His word: “I can officially tell you that I have resigned my membership of the PDP and that I have also refused to join either the Sherrif faction or any other party.

According to him, “My resignation followed the dishonesty of the party leadership who reneged on its pledge to provide a level-playing field for all aspirants at the primaries.

“There were reports that the party’s institution gave a specific instruction to party chairmen at the Local government level for members to vote for a particular aspirant, Pastor Osagie Ize-Iyamu.

“So my understanding is that the primaries was not free, fair and just,’’ he declared

“I will not hold Ize-Iyamu (responsible) but the party leadership, and I neither want to fight anyone nor remain in the party.

He equally confirmed that the ex- PDP Board of Trustee BOT Chairman, Tony Anenih, reached out to him.

“I refused to honour the invitation to his Abuja residence because of what happened in 2012.

“In 2012, he offered me money to dump my aspiration and join the PDP but I declined.

“In 2016, he still referred to that episode, accusing me of joining forces with Adams Oshiomhole to fight the party.

“Not knowing what he might also say after meeting with him and to keep my sanctity and integrity, I thought the best decision was to avoid meeting with him or any other leader of the party,’’ he said.

The former PDP chieftain, added that he would continue to serve the people of the state in other capacity through other foundations he had established to serve humanity.

“I have also told my supporters and follower to avoid money politics and eschew violence as no aspiration is worth innocent blood.”

Our Correspondent who has been monitoring the ongoing governorship campaigns in the state, recalled that Edebiri, vied for the gubernatorial office in 2012 on the umbrella of the defunct All Nigeria Peoples Party, ANPP and came third.

He however later pitch tent with the defunct Action Congress of Nigeria (ACN) after he lost the 2012 governorship ticket.

Edebiri, was a pioneer member of the ruling All Progressives Congress (APC), before he quit the party for the PDP in 2014.