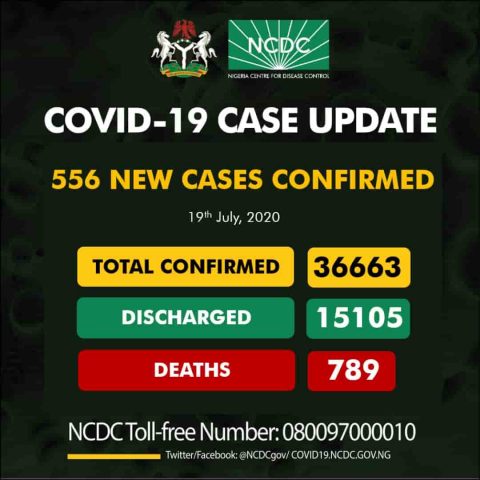 (AFRICAN EXAMINER) – The Nigeria Centre for Disease Control (NCDC) has announced 556 new COVID-19 cases in the country as total infections from the virus rise to 36,663.

Out of the new 556 daily cases, Edo state recorded the highest number of 104 infections.

NCDC disclosed this on its official twitter handle late on Sunday.

The health agency revealed that the new cases were reported across 17 states and the Federal Capital Territory (FCT).

It disclosed that Lagos state had the second-highest number of cases with 97 infections recorded while the FCT had 70 new infections.

It said only  one case was recorded in Borno state.

This brings the total number of cases recorded in Nigeria to 36,663.

According to the NCDC, the records show that 15,105 persons have been treated and discharged, with 789 deaths recorded so far in the country.