The Economic and Financial Crimes Commission, EFCC, has arraigned the two Nigerians; Nnanna Kalu, 26 and Ukaegbu Arisa Oti, 27 before Justice F. A. Olubanjo of the Federal High Court Umuahia, Abia State for defraud a south African $60,000. 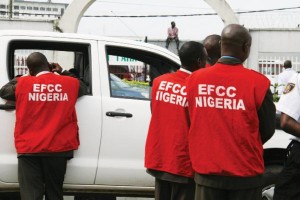 According to statement released by EFCC,Head, Media and publicity, Wilson Uwujaren on Wednesday said the duo were charged on a 28-count charge bordering on obtaining money by false pretence and forgery.

Nnanna Kalu  and Ukaegbu Arisa Oti are  part of a five-man syndicate that defrauded one Michael J. Firm (a South African) of the sum of $60,000 (sixty thousand dollars) under the pretense of registering his company with National Agency for Foods Drug Administration and Control, NAFDAC, to enable it supply the Federal Ministry of Defence with pre-cooked meals in sachets.

One of the charge reads: “That you Nnanna Kalu, Ukaegbu Arisa, James David Njoku (at large), Lekwauwa David Emeragh (at large) and Anyaso Okoro  (at large) on about 3rd June 2013 in Aba, Abia State within the jurisdiction of the Federal High Court of Nigeria with the intent to defraud obtained the sum of ($37,827,00) thirty Seven Thousand, Eight Hundred and twenty Seven United States Dollars from Michael J. Firm (a South African Citizen) through United Bank of Africa (UBA) account number 3001510615 of Adimigiri Nigeria Limited under the false pretence that the money is meant to register his company with NAFDAC for the purpose of supplying Federal Ministry of Defence with pre-cooked meals in sachet, from South Africa, which pretence you knew to be false and you thereby committed an offence contrary to section 1(1) (a) of the Advance Fee Fraud and Other Fraud Related Offences Act, 2006 and Punishable Under Section (3) of the same Act.”

The accused persons pleaded not guilty to the charge.

Justice Olubanjo adjourned the matter to Thursday for the hearing of bail application and 19th June 2014 for trial while the accused persons are to be remanded in prison custody.