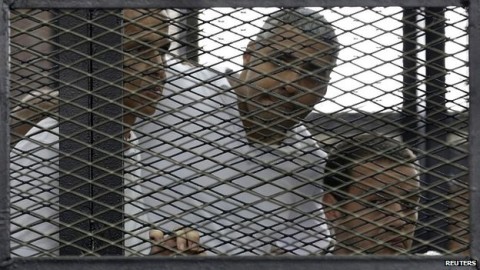 A horde of journalists gathered in London this morning to protest against the seven-year jail terms slammed on three al-Jazeera journalists in Egypt, BBC reports.

A court in Cairo found Australia’s Peter Greste, Mohamed Fahmy and Baher Mohamed guilty of sedition, though the trio had denied the charges against them and are expected to appeal. 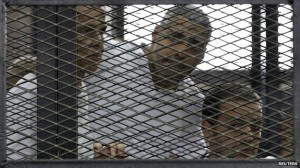 New Egyptian President, Abdul Fattah al-Sisi said Tuesday he would not “interfere” with the judiciary which he described as independent.

Earlier, Australian PM Julie Bishop said he would work with the Egyptian government to try to secure Mr Greste’s release “as soon as possible”.

“We support Egypt’s transition to democracy, but that also includes freedom of speech and press.”

Ms Bishop also ruled out imposing sanctions on Egypt, saying it was “not helpful at this stage”.

The father of Mr Greste told reporters in Brisbane that the family was “devastated” and “shocked” by the verdict.

“This is a very dark time, not only for our family but for journalism generally,” Juris Greste said, describing the ruling as a “slap in the face” to “all fair-minded people around the world”.

“Journalism is not a crime, or you should all be behind bars,” he affirmed.

However, there is hope that President Sisi might demand the reverse of the ruling.

In the protest in London, BBC staff were joined by colleagues from other news organizations in a one-minute silent protest outside New Broadcasting House in London.

The protest took place at 09:41, exactly 24 hours after the sentencing in Cairo on Monday was pronounced.

Peter Greste, a former BBC reporter, has been one of Australia’s most high-profile foreign correspondents

The journalists advocated “The case is unjust,” as echoed by the BBC’s News Director, James Harding.

He added that journalists around the world “have to stand together” for reporters being imprisoned for simply doing their job.

Harding declared journalists would be sending a letter to the Egyptian president, calling him to intervene.

The three jailed journalists were accused of supporting Egypt’s Muslim Brotherhood which resorted to an international outcry.