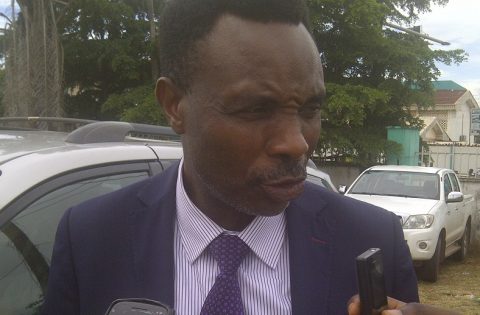 The Enugu state chapter of the All Progressives Congress (APC), has protested the appointment of non members of the party from the state into federal positions by the President Muhammadu Buhari.

The party said such obnoxious act is unacceptable to them, calling on president Buhari, the Senate president, and other well meaning leaders of the APC to as a matter of urgency  look into the matter.

Addressing newsmen after the State Executive Committee (SEC) meeting at the party’s secretariat in Enugu, state chairman of the party, Dr. Ben Nwoye, said that the party particularly frowns  at the recent appointment of Chief (Mrs.) Loretta  Aniagolu and one Engr. Uzor,  from the state who are not members of the APC as members of board of Federal Roads Maintenance Agency (FERMA).

The Enugu APC, equally listed earlier appointment of Justice Pearl Enejere (rtd) as á chairman of governing council of Othman Danfodio University, Sokoto; and Dr. Joseph Ilo a Resident Electoral Commissioner (REC) representing Enugu’s slot, saying the duo are members of the opposition People’s Democratic party, who are reaping where they did not sow .

According to the party, the most annoying thing is that the appointees are not only members of the  (PDP), but staunch critics of APC in the state.

The party  accused the Minister of Foreign Affairs, Geoffrey Onyeama and the Senior Special Adviser (SSA) to the President of Judicial Review, Barr. (Mrs) Juliet Ibekaku of having made the recommendations, even when 90 percent of all the appointees are from the same Eke political  Ward, in Udi council area of Enugu state, where he (onyeama) and Director General of Voice of Nigeria, Mr. Osita Okechukwu hails from.

He insisted  that apart from the D-G of VON, who is a true member of the party in the state and  has paid his dues,  other federal  appointees, from the state are anti APC elements.

“Our investigation reveal that it is the same person who is not a member of our party, the Minister of Foreign Affairs, who is also from Eke ward in Udi  LGA, and is a cousin to Lawretta Aniagolu; we don’t run political party in that fashion, it’s a political appointment, but he cares not about the political implications of recommendations he made.

“The same manner Barr. Juliet Ibekaku, who also does not care about political implications of recommendations she made, recommended her immediate cousin, Dr. Joseph Ilo to become the REC,”

Dr. Nwoye who was visibly sad said that the party’s constitution forbids members of APc taking appointment from PDP government or any other opposition government, adding that despite the sufferings and lack of employment party faithful agreed to suffer in the state and refused to taste the carrot from the ruling PDP government in the state.

“So in the same way,  the principle of reciprocity should have applied; I believe that the spirit of APC constitution forbids APC leadership from giving jobs to non members of APC, especially those who opposed our government.

“With regard to Engr. Uzor, he is the immediate younger brother of past chief of staff in Enugu state, Mrs. Ifeoma Nwobodo.

“We have come a long way in our democracy where we can no longer fold our arms and allow things go wrong. Enugu state does not belong to certain segment of people, it belongs to all of us, and we all must stand up and defend the cause of Enugu state.

“Appointments are not done in a nepotistic fashion, if it is done, the system, the fabric of the society will be left for destruction,” Nwoye stated.

African Examiner reports that some of the  chieftains of the party present during the briefing included,  chairman of the state caucus , and former military Governor of Gombe state, Captain Joe Orji, Acting state chairman, Chief Anike Nwoga, state publicity secretary, Mrs. Kate Offor, among others.