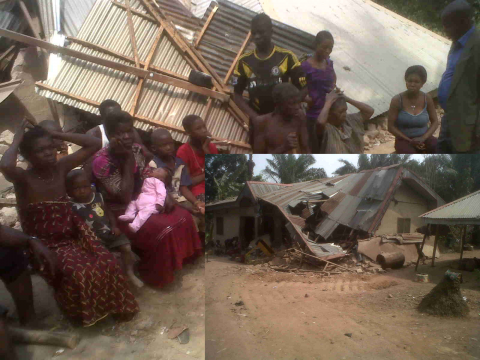 …As Tractors Pulled Down Residential Homes

The people of Ezza Nkomoru Onugba-Nike in Enugu east council area of Enugu state currently homeless have called on Enugu state government, corporate and organizations to as a matter of urgency come to their aid. 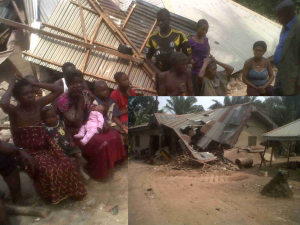 Professor Nnaji, according to the community, had last Friday allegedly used tractors and dozens of hoodlums, including policemen to pull down scores of residential buildings in the age long neglected village, an action they described as “arson and man inhumanity to man”.

When African Examiner visited the remote, poor, and neglected community, which had existed for over 100 years without any government presence, especially motorable roads, pipe borne water, electricity, and health facility on Monday, it was observed that the people who are predominantly peasant farmers are now living like refuges in their father land.

Narrating their ordeal to our correspondent in an interview in his palace, traditional ruler of the community, chief Tobias Otuboh, who couldn’t hide his emotion, said the entire community “is yet to recover from the shock of the man made disaster” allegedly inflicted on them last friday, 14th February 2014 by the erstwhile minister.

According to the Royal father, a retired Superintendent of police (DSP), who bowed out of the force in 2011, “we have lived in this community for more than one hundred years without any problem with any body or group”

“But surprisingly, last Friday I was in my house when one of our brothers, David Uzo, a pastor,  ran to me shouting, weeping, asking me to come and see how some men accompanied by policemen came into the community with tractors and started pulling down peoples housing as well as looting their properties”.

“Immediately, I did not waste any time, I rushed down to the place where the demolition was taking place, on getting there, I saw the tractor actually pulling down peoples houses, including that of those who were not around, I was shocked”

Chief Otuboh, said “all efforts to stop the tractor operator from continuing with the inhuman act hit brick wall, as those supervising the demolition exercise refused to talk or discuss with him.

The traditional ruler, added that apart from one of the invaders who told him not to disturb them because their action is backed by a court order, the other ones, disregarded him including the policemen that accompanied them.

He however, wondered how someone, no matter how highly placed in the society, could embark on such unholy and wicked act without any notice or explanation to the community.

The monarch, who appealed to his subjects, especially youths of the community to remain calm and resist every attempt of taking laws into their hands, as they awaits state government’s reaction, called on Governor Sullivan Chime, to as a matter of urgency wade into the ugly development now making life unbearable for his people.

He also appealed to the National Emergency Management Agency NEMA, to come to their assistance, saying the situation has thrown the entire community into pandemonium and perpetual hardship.

However, investigation by African Examiner revealed that the ex- minister of power, has acquired parts of the community land which he intend using for certain structures in no distant time.

Efforts by our correspondent to get professor Nnaji’s reaction on the matter failed, as his mobile phone was switched – off as at the time of filling this report.