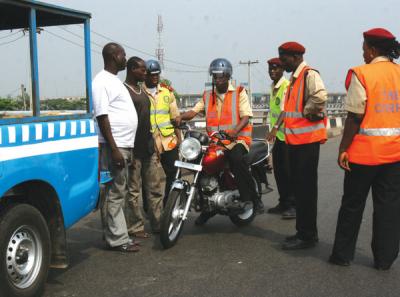 The Federal Road Safety Commission (FRSC) Mobile Court has convicted 19 out of the 21 accused, it arrested last week for various traffic offences in Enugu state.

According to him, although, 21 traffic offenders were apprehended last Friday by a special patrol team of the command and arraigned before a Moblie Court, two were discharged and acquitted while the remaining 19 persons were convicted.

The Enugu FRSC boss, further hinted that many of the offenders who were convicted by the Mobile court were however given option of fine, adding that they were arrested for violating various traffic rules

He said one of the traffic offenders, identified as Amechi Ozor, who was apprehended for using worn-out tyres, non-use of seat belt, among others, was sentenced to two weeks imprisonment.

The suspect, who was driving a Mitsubishi L300 Vehicle with registration No KR, S1CXK mobilized people against the marshals on duty shortly after he was flagged down.

The Sector Commander stated that the suspect was however arrested by the police, shortly after his action and arraigned before a Mobile court that sentenced him to two weeks imprisonment.

Mendie, therefore advised motorists and pedestrians to have better knowledge of traffic rules, adding that motorists must also know that they must obey traffic rules at all times.

He warned that any motorists that violate traffic laws must face the full weight of the law, adding that they should not be drunk while driving.

Advising further, the Commander urged motorists to avoid using their phones while driving and called their attention to the commencement of the “Ember Months.