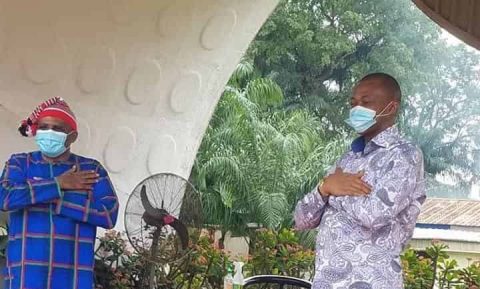 (AFRICAN EXAMINER) – The popular “Ebano” meaning (where to be) political family founded by former governor of Enugu state, Senator Chimaroke Nnamani, has bounced back after several years of going into oblivion.

African Examiner reports that the political dynasty which has continued to hold sway in the Enugu state political space since 1999, produced governor Nnamani, the immediate past governor of the state, Barrister Sullivan Chime, and the incumbent, Hon. Ifeanyi Lawrence Ugwuanyi respectively.

However, for some years now, the group, has been off the political arena, even when the initiator, Senator Nnamani, is currently serving as the Senator representing Enugu East senatorial district at the upper chamber of Nigeria’s National Assembly, (NASS).

Speaking with newsmen Thursday in Enugu on its planned solidarity visit to governor Ugwuanyi, this weekend at the government House Enugu, Coordinator of Ebeano, and former Secretary to Enugu state government (SSG), Dr. Dan Shere, said the philosophy and vision of the group is still very much alive.

He admitted that though, the group may have experienced some human challenges in the recent past, including internal wrangling among members, such misunderstanding he said, has strengthened its existence and make them stronger.

Dr. Shere, a onetime Pro-Chancellor, Federal University of Agriculture Markurdi, Benue state and Enugu state university of Science and Technology (ESUT), stated that the dream and philosophy of Ebeano, is anchored on promotion of good governance, adding that the transformation of the entire political landscape of Enugu state, stimulation of economic growth, including rural areas, as well as empowerment of the down trodden remains its watch word.

“I must say that since 1999, Ebano has really  provided leadership in Enugu state, and we are proud of our governors that have governed the state since these years, because they truly represented us well, by delivering  democracy dividends to our people,  they are true Ambassadors of Ebano political family” he declared.