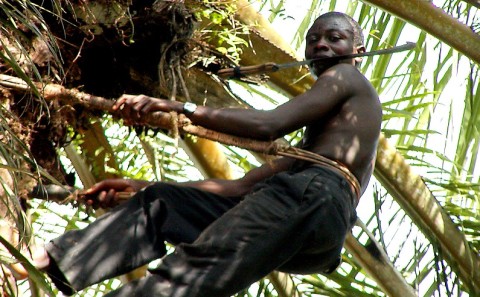 The Njoku family in Umuodiri-Umunumo Umuchoke Autonomous Community, in Ehime Mbano Local Government Area of Imo state was on Tuesday thrown into mourning, when a young palm wine tapper, Mr. Joseph Njoku was shot and killed by his elder brother. 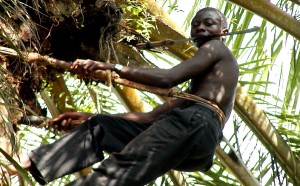 Late Joseph Njoku before he was killed in cold blood by his brother.

A source in the village told our correspondent that the victim, whose wife put to bed a bouncing baby boy a week ago, was sent to his untimely grave by his elder brother, Emmanuel Njoku over missing money and family feud.

It was gathered that trouble started when the alleged killer, Emmanuel, returned from sale of his palm wine and discovered that part of his money was missing from where he kept it.

The murderer, who thought his late brother had used the money to pay for a consignment of iron and steel which he just bought for the ongoing construction of his new house, became very enraged.

He was said to have pulled out a gun, ambushed his brother and shot him dead.

It was learnt that before the incident occurred, the alleged killer, had been unhappy with his younger brother and his mother, Mrs. Gladys Njoku for making him lose his portion of land to Joseph, who had started erecting building on it.

Emmanuel, who recently lost his only son, also accused his brother and mother of using diabolical means to eliminate the boy in order to allow the deceased Joseph take over his inheritance as the first son.

After killing his brother, the assailant, according to village sources, ran straight to the Ehime Mbano Police Division and surrendered himself with his gun to the police.

African Examiner, gathered that the alleged killer, has been moved to homicide department of the state police headquarters, Owerri, for further investigations, while the remains of late Joseph have been deposited in an undisclosed morgue.

Efforts by our correspondent to reach the state police public relations officer, Mrs Joy Elemoko (DSP) for reaction hit the rock as calls put across to her mobile phone could not go through as at the time of filling this report.