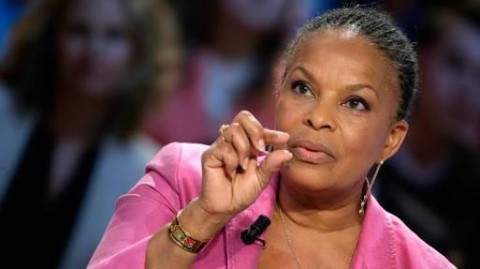 French Justice Minister, Ms. Christiane Taubira has resigned from office.
Taubira’s resignation was made public, shortly before plans to strip people convicted of terrorism against the citizenship go before parliament.
It would be recalled 130 people were murdered in Paris in a terrorist attack Friday, November 13, 2015.

In a tweet by the former Minister, reputed to differ with the controversial proposals, Ms Taubira said: “Sometimes staying on is resisting, sometimes resisting means leaving”.

Ms. Taubira, who is one of the France’s few senior black politicians, has been replaced with Jean-Jacques Urvoas, considered to be a supporter of the constitutional change and an ally of Prime Minister, Manuel Valls.

The 63 years old Minister who was born in French Guiana, has suffered many racist taunts from the far-right during her time as Justice Minister.

Expectedly, her left-wing leanings have put her on the other side of divide with official policies, in particular, after the November Paris terrorist attacks.