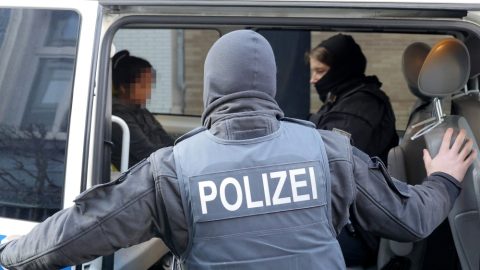 (AFRICAN EXAMINER) – More than 1,500 officers of German police on Wednesday carried out nationwide raids against members of suspected illegal prostitution ring in the biggest single operation in the history of German police.

A police spokesperson confirmed media reports that seven arrest warrants were successfully delivered and more than 100 individuals were temporarily taken into custody.

the raids as unprecedented strike against a “network with nationwide branches.”

The raids were carried out in 12 federal states, where security officers searched over 60 business premises believed to be connected to international criminal syndicate operating in the German red-light industry.

According to police, the senior leadership of the prostitution ring is made up of between 15 and 20 individuals with German and Thai citizens.

Several suspects were arrested in brothels and massage parlors and were believed by investigators to have resided in Germany illegally.

A 59-year-old Thai woman and a 62-year-old German man were considered to be the primary suspects in building the illicit and highly-profitable network in Germany which trafficked Thai women and transsexuals to let them work as prostitutes.

A police spokesperson noted that Special Forces did not encounter any resistance when they arrested the German-Thai couple.

“The mission was concluded without any incidents,” the spokesperson told newsmen.

The two ring-leaders were formally charged with human trafficking for the purpose of sexual exploitation.

“Many hundreds of men and women were subjected to the inhumane and limitless greed of traffickers over the course of years and across national boundaries,’’ a statement by interior minister Seehofer read. (Xinhua/NAN)