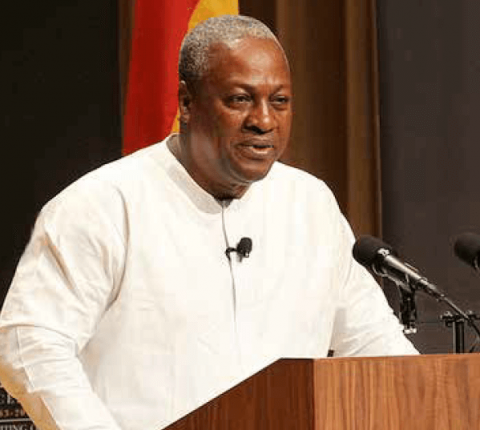 (AFRICAN EXAMINER) – Former President, John Dramani Mahama, has rejected the results of Monday’s general elections in Ghana, saying he is unwilling to accept the “fictionalised and flawed” results declared by the Electoral Commission (EC).

Speaking at a press conference on Thursday night, Mahama accused the Electoral Commission (EC) and government of manipulating the results.

In the Parliamentary election, the EC said the NPP has 137 seats in the 275-seat House while the NDC has 136. One seat is yet to be declared while one independent candidate, who leans to the NPP, also won a seat.

However, Mahama said there was no doubt “Ghanaians from every region of this great nation of ours, voted for change, and we did so in both the presidential and parliamentary elections”.

He said as a staunch believer in the experiment of democracy, the system of governance that allows the ultimate decision-making power to rest in the hands the people, he respected the will of the people when he lost the elections in 2016.

“I conceded, stepped aside and set in motion a peaceful transfer of power – because I understood that it was the will of the people.”

He added: “And if we are to progress as a nation, if we are to live up to the inheritance of our history, one for which people have paid the ultimate price – that sacred verdict of the people must be respected.”

Mahama said the sacred verdict is that he and his party won the presidential and parliamentary elections.

He added that “there was a deliberate plan to manipulate and predetermine the results” in favour of President Akufo-Addo.

“No amount of trickery, sleight of hand, or obfuscation will erase that reality,” he said, adding that the government has been using the military as an intimidating measure to reverse the results.

Mahama said his party will continue its meticulous audit of all presidential result sheets to ensure that the verdict of the people is upheld.

“We request of the international community to remain engaged in what is happening in Ghana and to take careful note of the current threat that is being waged to our democracy, our freedom, and our way of life.”

The police say five people have died in electoral violence since last Monday. Supporters of the NDC have been staging protests in some cities against the results.

Meanwhile, President Akufo-Addo has appointed a 15-member transitional team to facilitate the smooth changeover of administration even though his party and himself will remain as president for the next four years.

Under the Ghanaian constitution, a transitional team is enacted 24 hours after the declaration of presidential results.

The transitional team will be chaired by Chief of Staff at the Office of the President, Akosua Frema Osei-Opare.