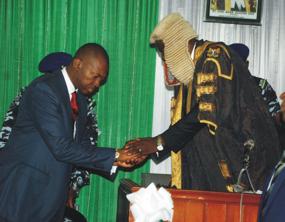 Gov. Chime of Enugu state (L) in handshake with the Speaker of Enugu House of Assembly

Works and Infrastructure received the highest sectoral allocation of N15.623 billion which according to the Governor was to enable the government actualize  its ambition of ensuring that all on-going urban and rural roads and other infrastructural development projects were completed and commissioned before the end of the 2014.

The Governor explained that the sum of N2.613 billion was set aside for urban and rural water supply while the adequate provision was also made for the payment of the State Counterpart Fund Contribution in order to be able to access the World Bank-assisted funds for the Community and Social Development Projects (CSDP).

On the performance of last year’s budget, the Chime said that facts on the ground has shown that the state has made appreciable progress and landmark achievements on all fronts with the committed implementation of the budget.

Receiving the estimate, Speaker of the State House of Assembly, Hon. Eugene Odo had applauded the Governor for raising the profile of the state with his pace-setting and enduring achievements even when the state’s income was among the lowest in the country.

Odo expressed satisfaction that the budget as presented covered the development imperatives of the state and assured that the House would give it a speedy passage.