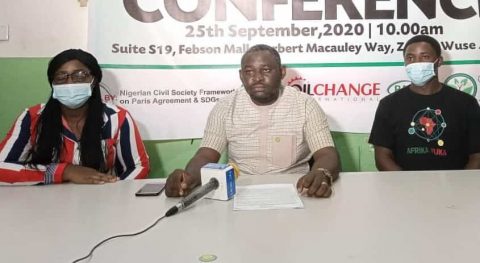 (AFRICAN EXAMINER) – A coalition of civil society organizations has urged the Federal Government of Nigeria to accelerate the national plans to a rapid, just transition towards 100 percent renewable energy for all Nigerians.

The group also called on the Federal Government to abide by their commitments to the Paris Agreement which requires phased reduction of Greenhouse gases such as coal fired plants.

Despite being a party to the Paris Agreement with a pledge to reducing greenhouse gas emissions, the Federal Government of Nigeria has recently placed a high priority on utilizing coal to increase the country’s electricity generating capacity.

In 2016, the Ministry of Mines and Steel Development announced that it was working in collaboration with the Federal Ministry of Power, Works and Housing to increase Nigeria power generation to include 30 percent coal in its power mix.

The coalition which includes the Nigerian Civil Society Framework on Paris Agreement and the Sustainable Development Goals (NCSFPAS), Global Initiative for Food Security and Ecosystem Preservation (GIFSEP) and Climate and Sustainable Development Network (CSDevNet), harped on the need for Nigeria to take advantage of technological advances in energy generation as the largest economy in Africa.

The group gave the charge at a press conference held in Abuja on Friday to mark the declaration of September 25, 2020 as a Global Day of Climate Action to coincide with the United Nations Climate Week.

The coalition further called on the Federal Ministry of Mines and Steel Development to stop the issuance of licenses for coal mining in Nigeria, adding that all the Community Development Agreements signed between the coal mining communities and the Mining companies should be urgently reviewed.

The group added that all mining operations in Nigeria undertaken by multinational companies should adhere to the UN Guiding Principle on Business and Human Rights.

They equally urged the Federal Ministry of Environment and the Environmental Standards and Regulations Enforcement Agency (NESREA) to immediately carry out an Environmental and Social Impact Assessment on all the coal mining sites in Nigeria.

The coalition noted that a study commissioned by 350.org in 2019 about the status of coal mining in Nigeria has shown that coal mining in Kogi, Benue and Gombe states has led to extensive environmental degradation including the contamination of air, water and soil with severe effects on the health of local communities.

The coal miners fingered in the study, according to them, are Dangote Cement, ETA Zuma’s Zuma 828 Coal Limited, and Lafarge’s (Ashaka) Cement, adding that more recently, Owukpa Consolidated Mines Limited has entered into the fray.

The group further observed that above-mentioned companies, despite stating lofty “green” and environmental sustainability positions on their websites and investor documents including annual and sustainability reports, continue to practice coal mining in a way that totally disregards the health and livelihoods of local communities and its effects on the global climate crisis.

“Coal mining leads to extensive environmental degradation. A visit to the mining communities   show that the coal mining activities have led to unacceptable levels of air, water and soil pollution.

“Drinking or domestic water is heavily contaminated and there is presence of heavy metals in the soil used for agricultural production, this has led to adverse effects on the health and livelihood of the communities living adjacent to mines in Kogi, Benue and Gombe states”, the coalition added.

The group said the mining companies are benefiting greatly from the goodwill of the local communities and not honoring the Community Development Agreements that they entered into. A review of these agreements showed that they are heavily skewed against the local people.

Meanwhile, Nigeria holds large coal deposits from the East to the Northern parts of the country, estimated to be at least 2 billion metric tonnes. The federal government’s goal is to revitalize the coal mining industry and expand power generation by attracting companies to exploit these large coal deposits.

This is despite the fact that power generation using coal remains one of the most expensive sources of energy. The authoritative BP Statistical Review of World Energy shows that renewables such as wind and solar are growing rapidly and are fast becoming the cheapest forms of energy.