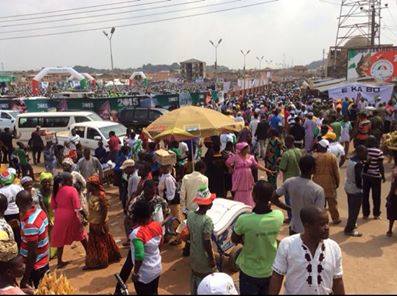 Party faithfuls, merry makers, fun seekers and admirers of Dr. Goodluck Jonathan, the President and Commander in Chief of Nigerian Armed Forces all converged at the iconic Democracy Park in Akure, Ondo state this Wednesday to listen and savour the promises of re-election bid. 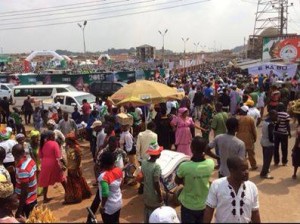 The rally was originally scheduled to hold about two weeks ago but had to be shifted so that President Jonathan, being the flag-bearer of the ruling party, Peoples Democratic Party, (PDP) could join six other contenders for the number one seat, to commit to non violence before, during and after the elections.

Ondo state had an unfair and inglorious share of loosing some of its brightest citizens to electoral violence in the past. When the campaigns were shifted about two weeks ago, rumour merchants went to town and started scoring cheap political points.

The mis-information machine claimed that Dr. Jonathan opted not to campaign in Ondo state because of anticipated “mass defection” from the new, improved jumbo PDP. Jonathan would later be seen making a public appearance with General Muhammadu Buhari, his lead challenger, hosted by both two eminent internationalists, Chief Emeka Anyawu, former Secretary-General of the Commonwealth of Nations and Dr. Kofi Annan, the former Secretary General of United Nations.

And as for the gleeful news of a mass defection, it turned out to be a hoax as only a few former members of the former ruling party in the state, the Labour Party (LP) like former commissioner Tola Wewe and Mr. Niran Sule Akinsuyi. Wewe was commissioner for Culture and Tourism while Niran Sule Akinsuyi was Commissioner for Special Duties. They were all members of the first exco chosen by Governor Olusegun Mimiko. They all went into league with remnants of the Olusegun Agagu’s erstwhile regime, like the former Chief of Staff, Mr. Femi Agagu.

The Special Adviser to the President on Niger-Delta who also doubles as the Chairman of Presidential Amnesty Programme, Mr. Kingsley Kuku said that the decision of some of his former party men to join All Progressives Congress, APC was wrong and that the late Dr. Olusegun Agagu would have disapproved of.

According to Kuku, whatever was the grievance of the elements who decided to find a separate flow elsewhere, the coming of Dr. Mimiko into PDP had made the fortunes of the ruling party a better one. Kuku explained that Mimiko proved unbeatable for both PDP and all the forebears of APC while he was in Labour Party. Mimiko always won, he said. “PDP is now a mega party with the coming of Mimiko”. Tola Wewe told sharpedgenews.com that he never went into PDP with Mimiko. He said that Dr. Mimiko remains his personal friend but he could not reconcile himself ideologically with PDP.

Niran Sule-Akinsuyi was not available for our interview. But sources claimed that he fell apart with Governor Mimiko after the later refused to anoint him as the next Governor of Ondo State. One of the nascent pressure groups operating in the state, the Ondo state Renaissance Group blamed the choice of Dr. Mimiko as the coordinator of Goodluck Jonathan’s Campaign in the South-West. The group accused Mimiko of systematically pauperizing politicians whom he thought could become strong and formidable to pose serious challenge.

However, Ondo State Commissioner for Information, Mr. Kayode Akinmade and the Chief Press Secretary to the Governor, Mr. Enny Akinsola rejected such explanations from their former estranged political compatriots as mere excuses for open treacherous conducts. According to Akinmade, some of the aggrieved associates would still be canvassed to understand that the euphoria about change for the alternative being canvassed by APC was meaningless and empty. He said that the PDP which Mimiko has become part of is a unique brand that cannot be successfully cloned by born-again democrats. He said “to seek a change from liberal democracy is to long for the despotic past which Nigeria had already escaped”.

Granting audience to the delegation of National Association of African Journalists in the United States and Canada led by its President, Mr. Eyobong Ita, the Chief Press Secretary to Governor Mimiko, Mr. Enny Akinsola explained that General Muhammadu Buhari whom the former political allies of Mimiko now deify as the much awaited Messiah does not truly possess the exaggerated patriotic qualities being ascribed to him. Akinsola said that no one should attempt to easily wash off the many sins of Buhari concerning the toppling of a democratically elected government, introduction of exorbitant school fees upon seizure of power in 1984, the unforgettable and sacrilegious non-transparent rule occasioned by the introduction of decree 4 of 1984 through which honest journalism became criminalized, execution of otherwise innocent Nigerians through retroactive decrees, corrupt importation of luggages containing hard currencies under pretext of diplomacy. He also explained that those repackaging General Buhari as a gentle man soldier are insulting the memory of several innocent souls who had to bear the brunt of his crooked brand of leadership.

Commissioner Akinmade said that such handlers of Buhari are actually feeding faeces to unsuspecting Nigerians in the guise of “hot dog”.

In his welcome address, Governor Olusegun Mimiko said that Ondo state is supporting President Goodluck Jonathan on principle. Governor Mimiko said that Ondo state, the land of Adekunle Ajasin, the famous front liner in pro-democracy agitation, the land of Gani Fawehinmi, the famous Human Rights activist, does not call cow a brother in order to eat meat, said the state was voting for Jonathan because the president had created access to education, health care, development and so on.

Governor Mimiko said that Ondo state is the cradle of progressivism. Ahmodu Alli, expressed gratitude to Chief R.F. Fasoranti,, Frederick Fasehun and Ganiyu Adams for the coveted endorsement conferred on Jonathan by the Afenifere group. The Special Adviser to the President, Mr. Kingsley Kuku reiterated the position of Governor Mimiko that PDP has now become a “great mega party” with the fusion of PDP and Labour party and that the governor would give a special love gift of victory to the president on February 14, 2015.

The chief of staff to President Goodluck Jonathan, General Jones Arogbofa said that Jonathan’s humility and professional prowess stands him out. Arogbofa reeled out a list of the good things like Polytechnic, dams and other infrastructures made available to the people of Ondo State and the entire South West.

Former state guber candidate of PDP who lost to Governor Mimiko in the last governorship contest in the state, Mr. Olusola Oke, said that Jonathan would embrace the rule of law, “would not demolish your houses and would elevate the people”.

The vice President, Architect Namadi Sambo said after connecting with the locals in faltering Yoruba language, appreciated the readiness of the people of Ondo state to always stand by the team led by Dr. Goodluck Jonathan. He said the team has succeeded at transforming Nigeria. He described as a lie the claim that the power sector was not working. He said that the Niger Delta Electricity Company for which he is the Chairman has constructed more than five thousand kilometers of transmission lines.

Adamu Muazu, the chairman of PDP said that he was grateful for the acceptance of both old and new PDP members in Ondo State to come together and secure victory. Muazu said that the people of the state are urbane, educated, cultured and cosmopolitan. He said that the president is highly educated and dedicated to the progress of the country. He said that the PDP remained the party to beat. He appreciated the turnout of the people. Unlike the practise at previous campaign venues, he did not present the party flags to any guber candidate. Ondo state has no guber race until 2017. However, PDP candidates for the senate, Dr. Bode Olajumoke (North), Yele Omogunwa (South) and Ayo Akinyelure (Central) were all on the ground

President Jonathan said that the former Director of NYSC, Ahmodu Alli became the Director General of the campaigns because of the track record in youth related issues. President Jonathan acknowledged the place of Ondo state as the home of progressivism, with impressive list of great personalities like Adekunle Ajasin and Gani Fawehinmi.

He committed to working for further development. He said that more funds would come for the federal institutions in the state. He promised the support of the government in the creation of not less than two million jobs every year.

Dr. Jonathan said that youths would be given grants to grow their own small and medium scale enterprises. He promised U-Win grants. He promised to work with youths and women. He said that his government has equipped thirty five thousand schools with Information Technology. He urged the Governor to work with Olusola Oke and others to discuss more about the people of the state.

President Jonathan said that Ondo state must always be on the front burner of issues whenever the leaders discuss politics. He called for one house so that opportunistic parties would not take advantage of the divisions within the PDP in the state.