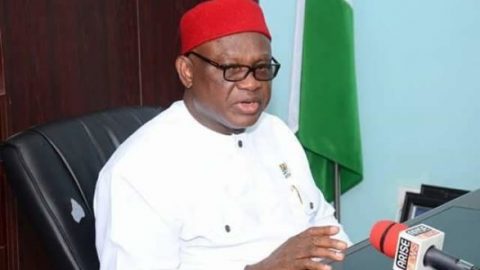 It noted that “the unfortunate endorsement of Atiku was embarrassing and ridiculing to the republican Igbo nation as politically naïve and pedestrian in their collective political strategy.

Recall that the chief  Nnia Nwodo led Oheanze Ndigbo, had last week Thursday during its  Imeobi, (Caucus) meeting in Enugu  endorsed the candidacy of Atiku, and his running mate, Mr. Peter Obi, a former governor of Anambra state.

Addressing a press conference in Enugu Thursday alongside chieftains of the group, Okorie, who is also the national chairman of United Peoples P arty UPP, said “we condemn in strong terms the disgraceful dragging of the revered image of pan Igbo, socio cultural organization Ohaneze into the partisan adoption of the presidential candidate of the PDP, Alhaji Atiku Abubakar under the contrived imeobi meeting of Thursday 24, January 2019.

Okorie said this compromising political scam was pulled off by a few card carrying members of the PDP to deliberate exclusion of other members of the Imeobi who are obviously in the majority.

The ICAI National leader who went down memory lane, recalled how such endorsement  by Ohaneze had affected the Igbo nation negatively in 1979, in 2002 and 2011

According to him, “what manner of desperation would persuade those who gathered at Enugu to desecrate the memory of the great Zik of Africa; by choosing to sideline the historic and epoch-making event of the commissioning of the Zik Mausoleum in favour of the adoption of Atiku.

He insisted that Ohaneze leadership allegedly erred since it was an undeniable fact that the PDP manifesto had no provision for the restructuring of Nigeria. “There is also no evidence of a Memorandum of Understanding (MoU) which Ohaneze reached with Alhaji Atiku,’’ he pointed out.

The group noted that for the fact that  there are 33 Igbo sons and daughters contesting for Presidential and Vice Presidential posts in the 2019 Presidential Election makes the purported Imeobi political misadventure a monumental tragedy.

The group, however, urged Ndigbo to join in imminent victory celebration of President Muhammadu Buhari by voting en mass for him, saying it was politically expedient for the Igbo electorate all over Nigeria to vote massively for President Buhari on Feb. 16.

“We urge the Igbo electorate who amount to about 30 million voters across the country to join hands with other Nigerians to have a major stake in the imminent victory of President Muhammadu Buhari in the forthcoming Presidential Election.

“We must not be the odd group out of the imminent victory celebration, as critical stakeholder, we must earn our claim to be supported to produce the President of Nigeria in 2023. Ndigbo are not cut out for the opposition.

“The very political leaders in People’s Democratic Party (PDP) who are misleading our people into putting all their eggs in the PDP basket will be the first to jump ship and abandon them and relocate to the ruling party. We are used to their kind and we know them,’’ he said.