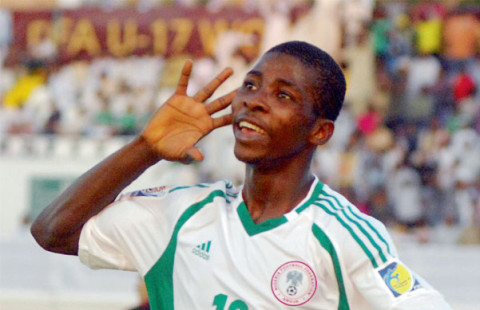 BAILTIMORE, MD (AFRICAN EXAMINER) – Taking true to his middle name, Kelechi Iheanacho has been showing signs of PROMISE in his early days with Manchester City, netting in pre-season games against Italian sides, AC Milan and AS Roma. He showcased himself in the Premier League when he sealed all three points late on for his side versus Crystal Palace at Selhurst Park.

In this era, since Nwankwo Kanu and Obafemi Martins sparkled with top European sides, Arsenal and Inter Milan respectively, Mikel John Obi (Chelsea) is the only Nigerian left that plies trade with one of the big clubsides. Yes, we used to have Obiora Nwankwo, Joel Obi, Nnamdi Oduamadi and Obinna Nsofor playing for the Milan clubs, and Victor Moses for Chelsea/Liverpool; they did not truely live up to the billings.

Top side Arsenal have Alex Iwobi, who is agemate of Kelechi, but the Jay Jay Okocha nephew cannot be compared to Kelechi (currently). Iwobi as good as he is managed just two goals in over 20 appearances for the Gunners this term.

Nigeria needs more Kelechis, who would represent Real Madrid, Bayern Munich, Barcelona, Liverpool, Manchester United, Arsenal, Chelsea and Juventus. Not only that, they must as well be core of their team.

The world would not really appreciate the talents Nigeria has got if the players continue to play for CSKA Moscow, SS Lazio, Granada, among others. The Belgian national team is respected today because most of their players play for top sides in Europe.

This year has undoubtedly been Kelechi’s breakthrough season and unsurprisingly, he has won the heart of many City faithful with string of eye-catching displays. Kelechi is technically-gifted. He is a blessing to any coach because he gives the coach options in the forward line. He is a tripatite of Ozil, Kaka and Eto’O.

It is hope that the incoming coach, Pep Guardiola will be impressed with material like him. If he keeps his head down, builds his confidence and keeps working hard, he is destined for the top for many years to come. He could be the star Nigeria had been longing for, especially in reviving the country’s football.