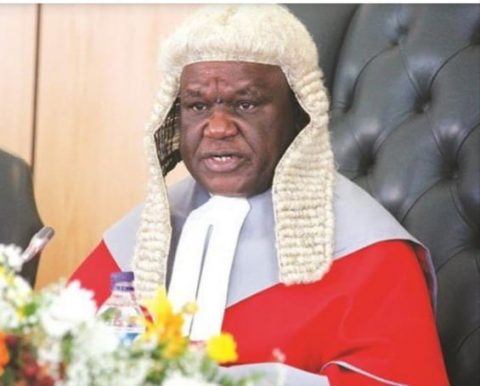 (AFRICAN EXAMINER) – The Zimbabwe judiciary looks headed to the doldrums as judges have alleged victimization by the Chief Justice, Luke Malaba who they accuse of giving himself sweeping powers and punishing any dissenting voices.

The case of a suspended High Court judge Justice Erica Ndewere who is accused of misconduct and has dragged President Emmerson Mnangagwa to court challenging the setting up of a Tribunal to investigate her, has opened a can of worms as the bench has written to the President complaining about victimization.

In a letter dated October 26 and titled “Untenable working conditions in the judiciary”, judges want the President to set up a Tribunal to investigate CJ Malaba for a myriad of issues including corruption, nepotism, unethical decisions and also using his position to harass the system.

Judges and magistrates said their morale is already low because of poor working conditions and fear of victimization.

They alleged that CJ Malaba interferes with magistrates’ judgments despite them having to be supervised by their superiors in the hierarchy while some officers have been clandestinely promoted as a way of planting them to spy on judges and magistrates.

“We address you Sir with fear and trepidation given the current fear which exists within the judiciary. It is an open secret that right across the judicial structures the Chief Justice now rules without fetter.

“At the superior courts, it is an open secret that judges no longer enjoy any respect and that administrative staff now spy on judges and report to the various registrars who in turn make reports to the JSC secretariat for onward reporting to the Chief Justice. As judges we no longer trust our support staff from whom we now have to hide our draft judgments for fear of being directed to change these,” said the bench in a leaked letter.

They alleged that judges are no longer respected with prosecutors also literally becoming judicial officers as they wield enormous power and regularly misrepresent the conduct of magistrates and judges in open court.

“Any attempts to protect the interests of accused persons or litigants are promptly reported to the Chief Justice’s office who thereafter directs heads of the various courts to investigate these.  Judges are therefore now afraid of their own jobs that they consciously or subconsciously make decisions that they consider safe even if these do no accord with the law.

“Where certain decisions are made which are unpopular with the Chief Justice, parties are directed to appeal with guarantees of success on appeal. Currently there is a witch hunt to establish which judges led a recent protest over a decision by Chief Justice to have all judgements and decisions to scrutiny by heads of divisions. Vocal judges and those in leadership positions on the association of judges are now targeted,” they alleged.

The judges said their conditions of service are not being reviewed while they share wigs despite Covid-19 dangers.

The situation affects the whole bench from magistrates to High Court, Supreme Court and Constitutional Court judges as none now dares disagree with the CJ.

“Your Excellency these are serious issues being raised against the Chief Justice and they deserve thorough investigation by an independent tribunal and Zimbabwe Anti-Corruption Commission,” the judges said.

This includes Justice Ndewere case where she is collectively suing the President, Chief Justice, Judge President, JSC and Minister of Justice