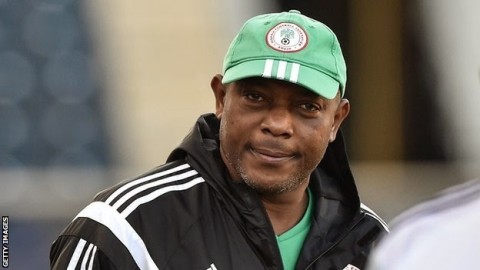 Super Eagles coach Stephen Keshi has accused Mark Geiger, the US referee, of being biased after his side were beaten 2-0 by France in Brasília. A header from Paul Pogba and an own goal from Joseph Yobo secured France a place in the quarter-finals of the World Cup and condemned Nigeria to a defeat that Keshi found hard to accept because of what he described as “a lot of mistakes” from the officials. 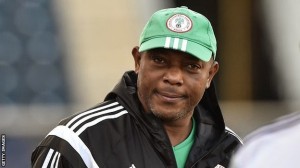 He went on to complain about a particularly poor challenge from Blaise Matuidi on Ogenyi Onazi that earned the Frenchman a booking and saw the Nigeria midfielder leave the field on a stretcher with a suspected broken ankle. He was also unhappy about an incident involving Olivier Giroud, who caught Mikel John Obi with an elbow that went unpunished.

“I am not happy with the officiating because Onazi, on two occasions, he had a very bad tackle and nothing was done by the referee,” Keshi said. “I think the referee was just … for me, I think he was biased. This is the first time I will speak about the referee in my life as a coach but it wasn’t good.

“If you look at the goal we scored, I don’t think there was any infringement. The referee is a human being, bound to make some mistakes, but a lot of mistakes is questionable. I am not happy about it but he’s the man who decides whatever goes on the pitch.”

Mikel said of the incident with Giroud: “I got an elbow and the referee saw it and he only gave him a warning, not even a yellow card, nothing. It was bad. We know the game – if you see it, act on it. The ref saw it. He did catch me. I don’t know if it was too hard but the intention was definitely there. I don’t think he is a dirty player. Everyone wants to win for his country. He hasn’t done those sort of things before so maybe it was just one of those things in the heat of the moment.”

Keshi acknowledged that the Nigeria goalkeeper, Vincent Enyeama, who has been so impressive in this World Cup, was at fault for the goal that saw Pogba give France the lead 11 minutes from time. “At that moment, it’s only him that can decide the reason he parried the ball,” Keshi said. “I am very far from where he was, his decision is final. What happened happened, and it cost us big.”