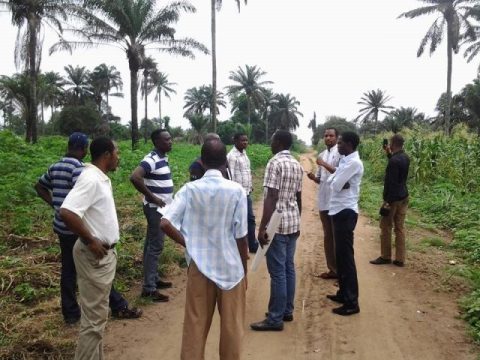 LAGOS, NIGERIA (AFRICAN EXAMINER) – The Lagos State Government on Monday set up a Task Force to check the menace of land-grabbing in the metropolis, as it vowed to tackle the activities of grabbers popularly called Omo-Onile with the full deployment of resources of government and applicable law.

While inaugurating the Task Force, the State’s Attorney General and Commissioner for Justice, Mr. Adeniji Kazeem, said the administration of Governor Akinwunmi Ambode was determined to apply the full weight of the law to permanently address the issue, adding that the havoc and unrest being caused by land grabbers was no longer acceptable.

He said henceforth, anybody who uses threat of arms or physical threat to dispossess people of their legitimate property would be treated as criminals in accordance with Sections 52, 53 and 281 of the Criminal Law of Lagos State.

The Commissioner added that it was noteworthy that Section 281 of the criminal law included land as things capable of being stolen, while Sections 52 and 53 of the law prescribe a jail term of two years for any person who forcibly enters or takes possession of land in a manner likely to cause a breach of the peace against a person entitled by law to the possession of the land.

“In recent years, land grabbers have caused havoc and unrest in different parts of the State by dispossessing legitimate land-owners of their properties thereby stifling commercial activities in the State.

“It is therefore important that the State Government not only identifies the effects of the problems being perpetrated by these unscrupulous elements on commercial activities and peace of the citizenry but also finds lasting solutions to the menace. That is the reasoning behind the set-up of this Task Force.

“Furthermore, the need to protect investors and maintain law and order also led to the setting up of the Committee. This, by implication, will encourage the verification of legal claims through litigation rather than resorting to violence,” the Attorney General explained” Kazeem stated.

Kazeem also disclosed that the State House of Assembly was in the process of passing a law that would exclusively deal with the activities of land grabbers by prescribing appropriate stiff punishment for offenders.

The terms of reference of the Task Force which will operate under the supervision of the Attorney General the Commissioner itemized include: “To reduce to a barest minimum the activities of persons or corporate entities who use force and intimidation to dispossess or prevent any person or entity from acquiring legitimate interest and possession of property acquired through State Government or private transactions; to co-ordinate the efforts of the various agencies of Government charged with enforcing the State Government rights over land in Lagos; and to work with all security agencies to ensure enforcement of State Government and private property rights in Lagos State.”

Members of the Task Force are: Mr. Akinjide Bakare, a Deputy Director in the Ministry of Justice who will act as Alternate Chairman; Dr. Afolabi Abiodun representing the Commissioner for the Environment; Mr. Olayinka Wasiu Adebayo and Mr. Faiq Abou both representing the Lands Bureau; Mr. Saheed Kassim, Chief Security Officer to Governor Ambode; Mr. Ganiyu Adebowale, Commander of Governor’s Monitoring Team (GMT) and Ms. Mosunmola Balogun, who is to act as the Secretary to the Task Force.

Mr. Bakare on behalf of the task Force noted that though the terms of reference was a very onerous task, yet the Committee would rest on the might of the State Government.

He disclosed that already, petitions had been received from several citizens including retired civil servants, who had served the State meritoriously, adding that it was pathetic that some people could forcibly dispossess people of their legitimate property, the more reason, according to him, why the Task Force would vigorously pursue its cause.