Lagos Threatens To Confiscate Buildings Used As Hideouts By Criminals 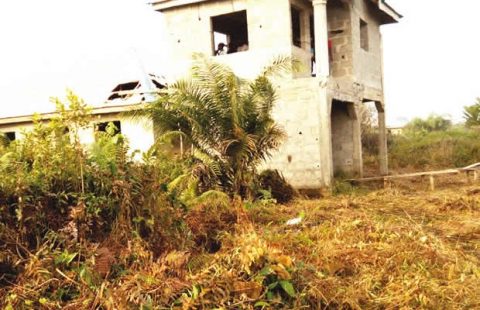 LAGOS, NIGERIA (AFRICAN EXAMINER) – The Lagos State Government on Tuesday warned that any building used as hideouts by kidnappers, vandals and other suspected criminal elements in any part of the State would henceforth be confiscated and taken over by government.

While vowing that it would henceforth scale up enforcement of restriction of commercial motorcycles, popularly called Okada, on certain routes and ban on street trading, the State revealed that security agencies have been placed on red alert and there shall no longer be any hiding place for criminal elements in any part of the State.

Rising from the monthly State Security Council Meeting chaired by Governor Akinwunmi Ambode, the State government said it had resolved to henceforth embark on massive and aggressive confiscation of properties used as hideouts by criminal elements in the city.

Lagos Commissioner of Police (CP), Mr. Fatai Owoseni, who briefed journalists at the end of the meeting alongside heads of all security agencies in the State, said the decision of government followed recent security threats, and the need to take strong and decisive action to address the situation.

According to Owoseni, “The take away for today after the Security Council Meeting is for us to look at all the strategies that we have been employing in tackling the security challenges that we had in the State and to further strategize with the view to sustaining those measures that would put all the criminal elements in check and the Security Council of the State has come out to let our people know emphatically that the State is more poised at tackling all the criminal challenges and making sure that all the criminal elements that are going about in the State will not be allowed any free reign; they will not be given freedom of space to practice any of their criminal acts.

The CP added that the Council also resolved that in as much as government had been enforcing the Okada restriction with human face, the law would henceforth be scaled up to achieve the purpose of its enactment.

He said: “The State still want to use this opportunity to further enlighten the public on the need to observe those laws that have been made in order to make life easy for the good people of Lagos.

“The two particular ones that we have looked at is the restriction of the commercial motorcycles to certain routes in the State and of course the activities of street traders. What we want people to know is that the State is not sleeping on its enforcement duties but government is just trying to be responsible in the way these laws are enforced.

“The Security Council wants us to seize this opportunity to let the people know that these laws are made to be complied with and that we will not stop at making sure that they are enforced as they are supposed to be, and that elements that contravene these laws would also be made to face the law.”

He debunked insinuations as to whether there were challenges in enforcing the laws, saying that government was only trying to enforce the law with human face and urged the people to cooperate with government.

Owoseni also advised criminal elements in the State to turn a new leaf and get themselves meaningfully engaged, as there is no hiding place for them in the State.

He further charged residents to be security conscious, saying that security starts with the people.