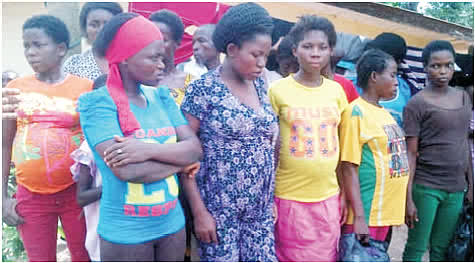 A 26 year old man, Kingsley Ubani, from Eziama Nsulu in Isiala Ngwa North local government area of Abia, has confessed to the police that he sold his three-year-old son to raise money for the burial of his late father. 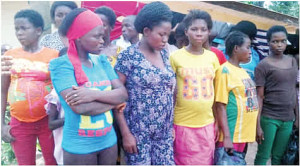 Hear him “I told my wife that I don’t have money to bury my father who was in the mortuary at that time and she approved of the transaction,”Ubani told the police.

Speaking to newsmen earlier, the state Commissioner of Police,  Mr Usman Tilli, said that the suspect was arrested following a tip-off.

He said investigations led to the recovery of the child who had been handed over to the grandfather for care and protection.

The state police chief further hinted that the police had on Nov. 11, 2013, also arrested another suspect, Chimere Sunday of Osisioma local government area of the state for selling his two children.

According to him, upon investigation, one of the children was recovered, adding that the buyers were on police wanted list.

Tilli said that the 19 pregnant teenagers/ persons who were also paraded, were rescued from an illegal charity home at Umuobia Housing Estate, Olokoro in Umuahia North local government area of the state.

His words: “A team of policemen from the command raided the home during which the pregnant girls between the ages of 15 and 23, including a nursing mother, were rescued,” he said.

Tilli said that the son and daughter-in-law of the operator of the illegal home were arrested while the prime suspect, Mrs Nma Achumba, was at large.

Achumba, he said, hitherto operated her illegal charity home in Aba, but decided to relocate to the rural area due to police crackdown on traffickers in the commercial city.

“We have given child traffickers a lot of chase in Aba and they now relocated to the rural areas,” he said.

In his reaction,  Mr Uchechukwu Ohuabunwa, son of the operator of the illegal charity home, said that he had severally advised his mother to stay away from such illegal business.

“I don’t know where my mother is at the moment though she told me that she was going for our father’s burial.

“I had earlier told her to let go of this business but she did not listen,” Ohuabunwa said.

Meanwhile, the commissioner has assured residents of the state of a crime free Yuletide.

He expressed confidence that the state would witness a crime free festivity, because the Command had cracked down and arrested notorious armed robbers and car snatchers terrorising the area.