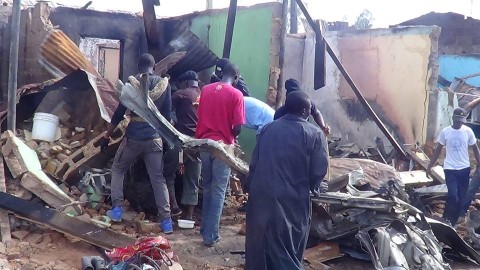 No fewer than six persons were killed early Friday morning, while many were seriously injured in an explosion which erupted in a mosque in Maiduguri, the Borno State capital.

Eyewitnesses account told our Correspondent in the state capital explained that the explosion took place in Jiddari Polo area around 5.00am, which is the time Muslim faithful set out to observe the dawn prayer.

It was gathered that the blast was carried out by a suspected suicide bomber, who was aided by two accomplices, but narrowly escaped, when accosted by some members of the community vigilante group who suspected their sinister plan.

The rescue teams including staffers of the National Emergency Management Agency (NEMA) and health officials have confirmed that six bodies have been discovered and since deposited at the mortuary.

Similarly, about 20 injured victims of the explosion have been taken to Specialist Hospital and the University of Maiduguri Teaching Hospital for medical attention.

The scene of the blast has been cordoned off by the security operatives.