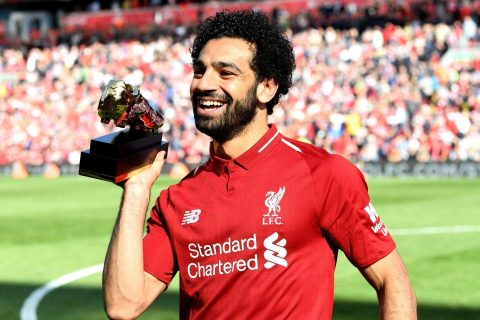 (AFRICAN EXAMINER) – Mohamed Salah broke the record for the most goals in a 38-game Premier League season and claimed the league’s Golden Boot award in Liverpool’s 4-0 victory over Brighton at Anfield on Sunday.

Salah scored his 32nd goal of the league campaign in the 26th minute as he turned sharply inside the box and fired into the bottom corner after receiving a pass from striker Dominic Solanke.

The goal meant the Egypt international finished two ahead of Tottenham’s Harry Kane in the race to be the league’s top scorer. Kane, who scored twice in a 5-4 win over Leicester on Sunday, had won the award in each of the past two seasons.

“I had no clue about the record [Salah’s 32 goals],” Liverpool manager Jurgen Klopp, who brought Salah off in the 84th minute, admitted after the match. “I took him off and then I heard that Tottenham had scored five — Harry Kane could have got them all! He has been brilliant, and he can improve so much. He will score in the future, 100 percent.”

Already the PFA Player of the Year and Football Writers’ Association Player of the Year, Salah, who has now scored 44 goals in all competitions, had been stuck on 31 Prem strikes since April 21, failing to get on the scoresheet against Stoke and Chelsea.

The goal also saw Salah claim a series of other records. He is now the all-time top-scoring foreign player in a single season in Premier League history, moving past Ronaldo and Suarez.

And in netting against Brighton he became only the third player to score against 17 different opponents in one campaign. Arsenal’s Ian Wright and Robin van Persie are the only other players to do it in a 38-game season.

The goal was also Salah’s 29th from inside the penalty area, which takes him past van Persie’s 28 notched with Arsenal in 2011-12.

However, he is still three goals short of Ian Rush’s record of 47 goals in all competitions in a single season for Liverpool, set during the 1983-84 season, and he will need to score in the Champions League final to match that.