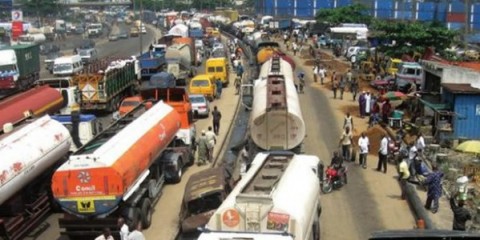 OGUN, NIGERIA (AFRICAN EXAMINER) – A multiple accident occurred on the Lagos-Ibadan expressway Wednesday morning, causing hitches in the traffic flow on the ever busy axis.

The accident which occurred after Magboro, inward Lagos, involved articulated truck and another loaded trailer.

The development affected the residents of adjoining areas such as Arepo, Ibafo, Mowe as well as those traveling from other States to Lagos.

No casualty was recorded in the accident. Officials of FRSC and Lagos State Transport Management Authority (LASTMA) arrived early with crane at the scene of the crash, to clear the trucks from the road, so as to allow free flow of traffic.