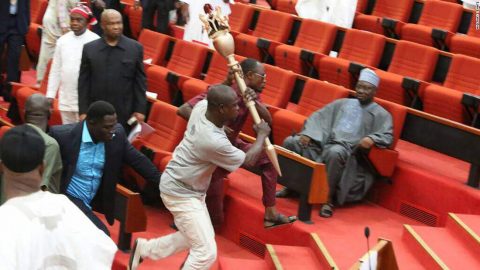 Photo: Some thugs invade Nigerian Senate floor and ran away with the mace

(AFRICAN EXAMINER) – The Federal Government of Nigeria has expressed shock at the invasion of the National Assembly and the subsequent snatching of the Senate mace by thugs on Wednesday.

In a statement issued in Abuja on Wednesday, the Minister of Information and Culture, Alhaji Lai Mohammed, said the security agencies have been directed to immediately unravel the circumstances surrounding the breach of security that led to the invasion.

He said the security around the National Assembly complex would also be reinforced to prevent a recurrence.

On Wednesday, the country was shocked with news of invasion of the Nigeria National Assembly during plenary and subsequent carting away of the senate’s mace, its symbol of legislative Authority.

The thugs were linked with suspended Delta Senator, Ovie Omo-Agege, who was recently suspended for 90 legislative days for taking the senate to court.

The embattled senator was later arrested by the police over the snatching of the senate mace.

Meanwhile, the People’s Democratic Party, (PDP) in Delta, the home state of Sen. Omo-Agege, has strongly condemned the action of the senator.

A statement issued and signed by Ifeanyi Michael Osuoza, the State Publicity Secretary of the party reads in part:

“Delta state PDP is aghast and flabbergasted by this shameful show of brazen impunity and unbridled affront on our democracy by a member of the Senate, who is not only expected to be distinguished and matured in actions, but is sadly from Delta State and representing the intelligent, discerning and well respected people of Delta Central Senatorial Zone.

“Senator Ovie Omo-Agege, who has been described as the mastermind of this invasion act by foreigners, for even being mentioned, associated and identified with this callous act, has brought shame to his name, the name of Delta State and the name of the people of Delta Central Senatorial Zone, who he represents, with this shameless act of national embarrassment, indiscretion and disgrace.

“The Delta State (PDP) condemns the actions of the alleged thugs identified as loyalists of Senator Ovie Omo-Agege, for invading the Senate chambers and taking away the Mace, the symbol of Authority of the Senate, illegally.

“We fully align ourselves with the position of the National Assembly, NASS, which has quite appropriately described the action as treason and given the police, DSS and other responsible security agencies, 24 hours to recover stolen mace.

“We are in total support of the decision of the Senate, signed by Sen. Aliyu Sabi Abdullahi, Chairman, Senate Committee on Media and Public Affairs, to get to the roots of this sad assault on democracy and an obvious act of treason which the seizure of the mace by some hoodlums represent.

“We endorse the position of the Senate which has mandated the Inspector General of Police, Mr. Idris Kpotum Ibrahim and Director General of the State Security Services (SSS), Mallam Lawan Daura, to retrieve the mace stolen by the hoodlums within 24 hours.

“Nobody is above the law, no matter your position and acts of lawlessness and brigandage such as this, allegedly coming from a man occupying such a hallowed position is shameful and should be condemned by one and all.

“Delta State PDP hereby tenders an unreserved apology, on behalf of the good and law abiding citizens of Delta State, to the distinguished members of the Nigerian Senate and the National Assembly and indeed the entire Nigerian population for this national embarrassment which a Deltan has brought on our dear State.

This is another clear testimony of the kind of leadership that the All Progressives Congress, APC is giving Nigerians and a dangerous early warning signal of what and how they intend to prosecute the forthcoming 2019 general elections.”