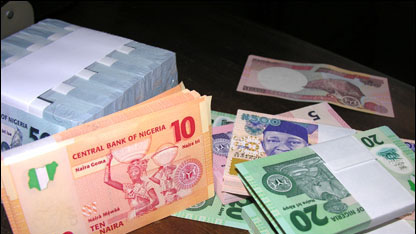 Commandant of the Corps in the state, Mr David Bille, who disclosed this to newsmen in Awka, the Anambra state capital, said  the arrest of the naira vendor lady was aimed at forestalling illicit sale of the country’s currency.

According to him, “the clampdown on the naira vendors and sellers is hinged on the CBN’s Act, Sections 20 and 21 that makes it a punishable offense for any individual or group of people to hawk, sell or otherwise trade in the naira notes, coins or any note issued by the CBN.”

The NSCDC boss in the state, further hinted  that the female suspect, was nabbed by his men with various denominations of naira around Dike Motor Park, Awka, adding that “a total sum of N398,500.00 consisting of various denominations were recovered from the suspect where she displayed the money waiting for customers.

Bille said: “we have commenced full Investigations into the matter to ascertain the source of the naira notes and once we are through, the suspect will be charged to court, stressing that his organization  and the CBN would continue the clampdown on the perpetrators of the offence, which is punishable under the CBN Act 2007 and carried not less than six months jail term or a fine of not less than N50,000 or both.

”Acts of spraying the naira notes at occasions, soiling and writing on the naira, squeezing the naira, as well as hawking and selling of the country’s currency notes, are abuses of the naira and are punishable by law.

The Commandant therefore, advised Nigerians to desist from the act, saying  that “our currency was one of the symbols of our national identity.

African Examiner reports that the act has been rampant in parts of Southeast Nigeria, especially wedding and funeral ceremonies venues.