OPINION: The Chibok Schoolgirls Tragedy Can Be Real 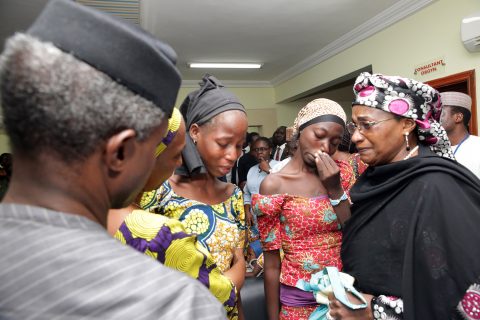 Nigerians woke up on the night of 14–15 April 2014, to be informed that some 276 female students had been kidnapped from the Government Secondary School in the town of Chibok in Borno State, Nigeria. At that time, Boko Haram, a growing Islamic sect, claimed  responsibility for the kidnappings. Boko Haram is an extremist and terrorist organization based in the northern part of Nigeria but forced to the northeastern Nigeria. We think that Boko Haram would have loved to have the entire Nigeria and not just the three States they were pushed to. To the Boko Haram credits they were able to raise their flags in three States, establushed control in 14 local government areas,  pronounced a Caliphate and still carring out attacks in several states including within the Federal Capital Territory Abuja. Their attacks on our churches and worship places will remain our continual prayer points, hoping that Boko Haram members (those on the fields and those amongst us sending the boys out) will eventually come to repentance with necessary restitution and that all classes of victims will be able to forgive them.

From that initial start we learned that 57 of the schoolgirls were able to escape over the next few months of their captivity. From these escaped girls the public got more information about their captors, motives and possible location. Chibok schoolgirls are not the only ones in Boko Haram captivity but the group that gave  international attention  and aroused awareness, formation of the “BringBackOurGirls” forum,  human rights conferences, etc. The then Federal government of Nigeria was eventually dragged into some action.  Their action seemed belated, inadequate and not  robust enough to recover any of the captured schoolgirls or others from this notorious Boko Haram. Similarly the BringBackOurGirls group could only block traffic in a few streets in Abuja with their red dressing as their major achievement. Nigeria must have lost some 200,000 lives directly to Boko Haram insurgency, about 2 million persons displaced within and outside the northeast subregion. But we are now learning that for many top Nigerian politicians it was a money making venture. Monies they themselves allocated to fight insurgency, investigation is revealing that such were shared amongst top politicians. We pray that EFCC  and others will make their investigation public, for our information and learning, even when they fail to get a single  conviction.

At various points our hopes were raised that the 219 remaining girls might be released. Our hopes were further strengthened by many popular Nigerian prophets. Perhaps we should leave their own activities on Boko Haram and national politics to some other opportunities, because they deserve full treatment.  Nevertheless all hands have been busy including the news media.  Reports have suggested that Boko Haram might be hoping to use the girls as a negotiating pawn in exchange for some of their commanders in jail. Luckily in May 2016, one of the missing girls, Amina Ali, probably also escaped on her own and was found. Amina  gave the impression that the remaining girls were still there, but that six had died. Now officially we have 21 released to leave a balance of 198 from Chibok schoolgirls only. The public should note that the Chibok schoolgirls kidnapping was just a fraction of the Boko Haram captivity. Boko Haram captured or killed anyone else who might be unfortunate to stand on their way. The organisation has not demonstrated any level of discipline or ability to fight on defined targets or purpose but just anything that can increase publicity of the barbaric activities. An organisation found on religious tenets just lost control and became killers and perpetrators of all classes  of evils. That is the first tragedy.

In whichever direction one chooses to review the activities of Boko Haram everything about it is a tragedy. A religious sect shouldn’t be a vanguard unleashing terrorism in the neighbourhood instead it may itself  face opposition or persecution. This is the known model. But Boko Haram has been unleashing terrors, Kidnapping, bombing, killing and stealing. They can still earn some of our sympathies now by releasing everyone in their captivity unconditionally and turn a new leaf for national reconciliation and building of the society they have wickedly destroyed. It remains a tragedy otherwise.

The second level of the tragedy  is  that happenings  in Africa don’t often capture the world’s attention. In this occasion some Nigerian  women have not kept quiet and speaking out boldly.  More than two years  after terrorists kidnapped these schoolgirls the women are still not quiet. They stirred a sense of global outrage reserved only for the greatest of injustices in a world where suffering and injustice are all too common. We shall write on these women on a later date but we hope they remain focused and resilient. But if the rate of success is that over  two years later and despite the forces unleashed by their “BringBackOurGirls” social media campaign only 21 girls are released, the job is far from won.The concerned stakeholders must extract, quickly from these 21 newly released,  the level of horrors being  perpetrated against them by their captors, the Boko Haram. Information may create new resolve and more urgency in our collective effort in pushing through the entire episode.

The next level of the tragedy comes to the individual families and persons. The why me questions? Then in addition to the African society questions. In the past children like these were classified and badly labelled as outcasts. It shouldn’t henceforth be so. These are heroes who were able to survive all what Boko Haram could have  unleashed. No feeding, clothing, no health care, no nothing and two and a half years they are home; whereas Boko Haram’s  sponsors are in their hiding ashamed to come public. The tragedy is not against these survivors but their captors, the sponsors and the innocent young men and women indoctrinated to fight for Boko Haram. Nigeria government has a lot of rehabilitation work to do, first to train the right professionals for such a job.