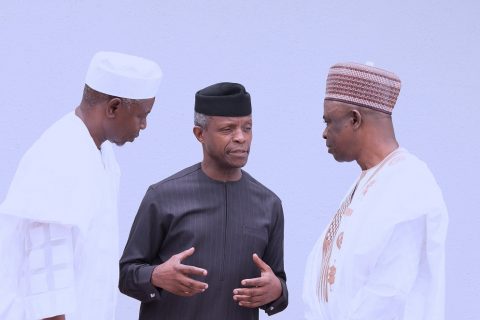 ABUJA, NIGERIA (AFRICAN EXAMINER) – Acting President Prof. Yemi Osinbajo has finally inaugurated the two Ministerial nominees who have since been screened and confirmed by the Senate.

While Ocheni replaced the former Minister of State for Labour and Employment Mr. James Ocholi (SAN) who died in an auto crash in March 2016, Hassan is to take the position of former Minister of Environment, Mrs. Aminat Muhammed who was appointed in 2016 as the Deputy Secretary General, United Nations (UN).

The inauguration took place Wednesday inside the Council Chambers of the Presidential Villa, after which the weekly Federal Executive Council (FEC) commenced.

Prof. Osinbajo who promised that the portfolios of the new Ministers would soon be announced reiterated that the FEC was committed to the reform programmes of the Federal Government (FG) as stated in the Economic Recovery and Growth Plan which it launched some months ago.

The acting President restated that the present administration was focusing on the key areas which needed much attention, so as to make a difference in the country and in the lives of Nigerians.