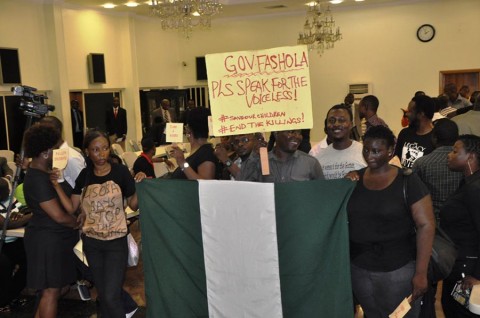 Scores of parents and old students of Unity Schools in Nigeria on Monday stormed the office of the Lagos State Governor in Ikeja, Nigeria to protest the massacre of 59 students in Yobe State by Boko Haram recently. 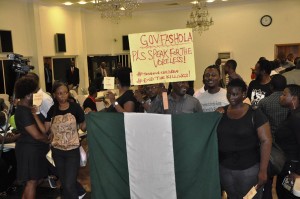 Some of the protesters at the State House, Ikeja

The protesters were all dressed in black attire chanting different dirge and urged the Federal Government, State Governors and the military agencies in the country to end the insurgency.

The protesters brandished placards with the inscription: “Boko Haram, stop killing our children,” “Fashola, Speak For the Voiceless,” and “Enough of senseless killings.”

The protesters, under the aegis of Unity Schools Old Student Association, (USOSA), said the killing of students of Federal Government College, Yobe State and others who were slain in the northern region of the country consecutively leave much to be desired.

They condemned the killing of the students who were killed by Boko Haram Sect after attacking Bunu Yadi, Yobe state; burning their hostel, classrooms and several houses noted that the incidents have plunged the region into a war situation.

Each of the protesters held placards bearing the names of the students who were killed in the Yobe school attack.

A protester, Mrs. Ibiyemi Olufowobi lamented that the state of insecurity in the North, saying this had defeated the purpose for the establishment of the unity schools in the country.

According to her, unity schools were established to foster unity irrespective of the language, faith, ethnic and tribe and development in the country, demanding that the Federal Government offers free medical service to all the victims of previous attacks, Bunu Yadi attack and subsequent attacks; and compensate the families of the victims.

Addressing the protesters, Fashola lamented the growing insecurity in the country, saying it was the responsibility of all to curb the situation.

1 Comment for “Parents Protest In Lagos Over Yobe School Killing”